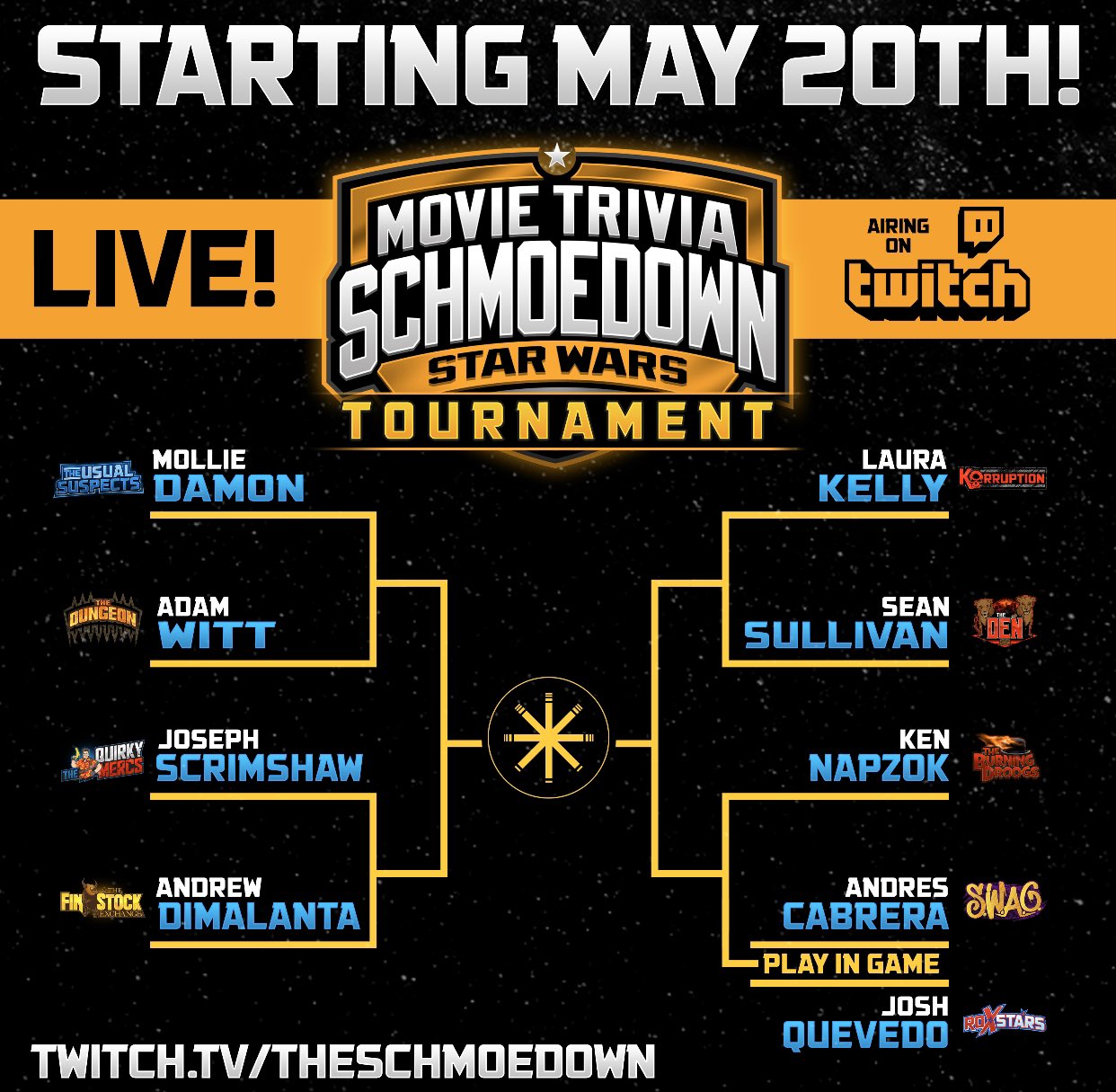 This post will have SPOILERS for the matches held today on Twitch between Scrimshaw/Dimalanta and Damon/Witt.

A long time ago in a galaxy far, far away….

The Movie Trivia Schmoedown has found a way to provide content to its fans during this time of isolation and social distancing, and it takes place on the site called Twitch.

On Wednesdays, the MTS has arrived on Twitch to host matches from the Star Wars tournament, where 8 competitors are striving for the chance to challenge the reigning Star Wars Champions, the seemingly unbeatable Alex “The Demon” Damon.

I am going to be honest with you.  I have hoped that the powers that be in the Movie Trivia Schmoedown would have taken the Star Wars Division and closed it down.  I had never felt that it was worth having a whole division over Star Wars.  There were several reasons.  One, there were not very many competitors.  You would have three or maybe four that were real challengers.  Two, the champion, now Damon, and before him Sam Witwer, were so unbeatable that there was no one who could legitimately challenge them.  Three, the division did not have very many matches.  In fact, you might get two or three Star Wars matches a year.  Four, the questions are such deep cuts that it is practically impossible to play along, one of the fun aspects of the show.

However, with this current tournament, my opinion has changed, big time.

The use of the tournament helped provide matches for the division.  While the questions are still insanely difficult for me to answer, this tournament has eight challengers in it (nine if you count the play-in game) and these challengers are all just really strong.  Honestly, I could see several of them give the champion are real battle.  In fact, I legitimately think there are 5-6 players here that are outstanding and whom I could see as championship material.

And since we have been able to see the players more (whether it be in the game or in the promos leading up to the matches), we are able to see more of their personalities, giving us more chance to root for them.

Yes, I did not know very many answers today during the double header on Twitch, but it was amazing and thrilling the entire time.  The match between Joseph Scrimshaw and Andrew Dimalanta was unbelievable, with both men having perfect games and having the match decided in sudden death.  Unfortunately, the final question was decided by a challenge and Andrew Dimalanta won 32-31.  Even that question, one could argue that Joseph Scrimshaw’s answer was correct, just not correct enough.

That is why this division has become suddenly so strong.  These are amazing performers who are answering questions that you just should not know and it depends on a level of specificity if you intend on advancing.  The Dimalanta/Scrimshaw match was one for the ages and one of the best matches of the season.  All of the other competitors in this tournament had to be happy that these two had to play one another in the first round because they certainly played a match that could have been in the finals.

Molly Damon, the wife of the current champion, was in the second match against Movie Guy Adam Witt.  While this match was not one as precise as the first one was, this was an extremely contentious contest.  Within the first round, there were three challenges thrown down, which is a remarkable number for the first round and you could see that some involved were a tad shaken.  Kristian Harloff and Mark Ellis, the hosts of the match, were clearly bothered.  It took incredible composure to get through the round.

Molly Damon nailed her 5 point question at the end to finish off the match 24-19.  The answer she had was really tough and it was impressive that she pulled it.  She showed some great composure to make it through this challenging match and Adam Witt looked very strong in defeat.

Next week, we get to see “The Pit Boss” Ken Napzok, author of a Star Wars book, take on “Ace” Cabrera.  Ken had dropped perhaps one of the greatest promos in Schmoedown history prior to the beginning of this tournament.

So, Star Wars Trivia on Twitch.  It has been amazing so far and it sure looks like the best is yet to come.