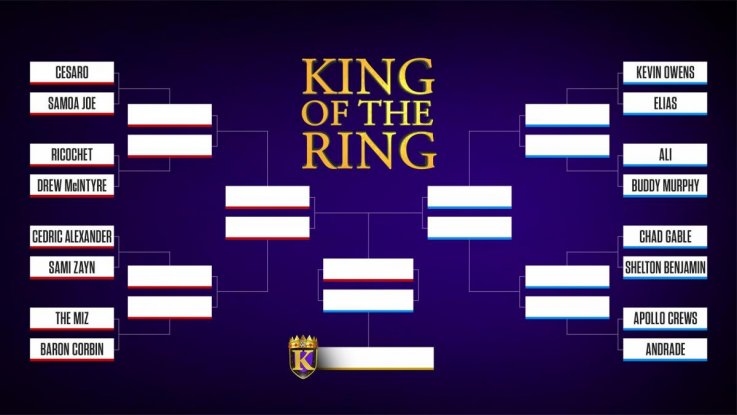 Brackets for the King of the Ring tournament that begins on Monday Night RAW tomorrow night came out and there are some wild matchups.  Some very unexpected matchups too.

On the RAW side, this is what I think…

Cesaro vs. Samoa Joe.  I so want Cesaro to win this.  What a match it could be.  I think Joe wins however.

Ricochet vs. Drew McIntyre.  Another great match.  Another one that could go any way.  I think Drew wins this, but I would not be shocked if Ricochet pulled it out.

Cedric Alexander vs. Sami Zayn.  This is the only gimme on this side of the bracket.  Cedric wins.  Sami has not won much of anything since he returned form injury.

Second round would be Joe vs. Drew M and I have Drew.  Cedric vs. Baron and I’ll take Cedric.

On the Smackdown side…

Kevin Owens vs. Elias.  KO gets screwed over and Elias moves on.  Hope I am wrong.

Ali vs Buddy Murphy.  This could be the match of round one.  I give it to Ali.

Chad Gable vs. Sheldon Benjamin.  This is round one sleeper.  Chad Gable wins.

Apollo Crews vs. Andrade.  This is Smackdown’s no-brainer. Andrade is the winner.

Round two has Elias vs. Ali with Ali getting the duke.

Semi finals Ali vs. Andrade.  I’ll go with Ali because of who I picked on the other side.

Finals Drew McIntyre defeats Ali to become the new King of the Ring.

I would love to have Cesaro win this tournament, but I don’t think he will.  Some of the matches that we could get are insane (Ricochet vs. Cedric Alexander?  Cesaro vs. Drew McIntyre? )

The tournament runs across WWE TV until the Clash of Champions on WWE Network on September 15th. Yesterday was the WWE’s big show of the summer, SummerSlam.  As one of the “Big 4” shows of the year, the expectations are high.  Did the show deliver?  Let’s look at some of the highlights.

The Pre-show was actually fairly interesting as a few notable things happened.  Drew Gulak defended his Cruiserweight Championship, and Alexa Bliss and Nikki Cross defended the WWE Women’s Tag Team Championship against the IIconics.  Both were fine matches.

But the rest of the show was the big news.  First, in a Buddy Murphy vs. Apollo Crews match-up, Rowan attacked Murphy outside the ring during the match and yelled at him to keep “my name out of your mouth.”  This is, of course, the next step in the ongoing “Who attacked Roman Reigns” storyline as Buddy Murphy accused Rowan of driving the fork lift that pushed over the stage set onto Roman recently.  I really like that they are moving this storyline along slowly.  Too many times, WWE rushes the results and it does not allow us to develop a story effectively.  Now I don’t want them to run this through to Wrestlemania of course, but a few weeks of story development is a good thing.

And them Edge interrupted Elias’ put down Toronto concert and Edge gave Elias a spear!! It was an amazing thing since I was under the implication that Edge was on the no touch list because of his neck troubles.  I don’t know what this means, but Edge got one of the bigger pops of the evening from the hometown crowd and the spear was absolutely beautiful.

On the main show, I enjoyed most of the night.  There were good parts and weaker parts for sure, but SummerSlam was a solid show.

Becky Lynch forced Natalya to tap out to the Disarmher, which ended a fairly brutal match.  I thought both ladies did a great job.  I especially enjoyed the sharpshooter on the top rope, which was something that I had never seen before. 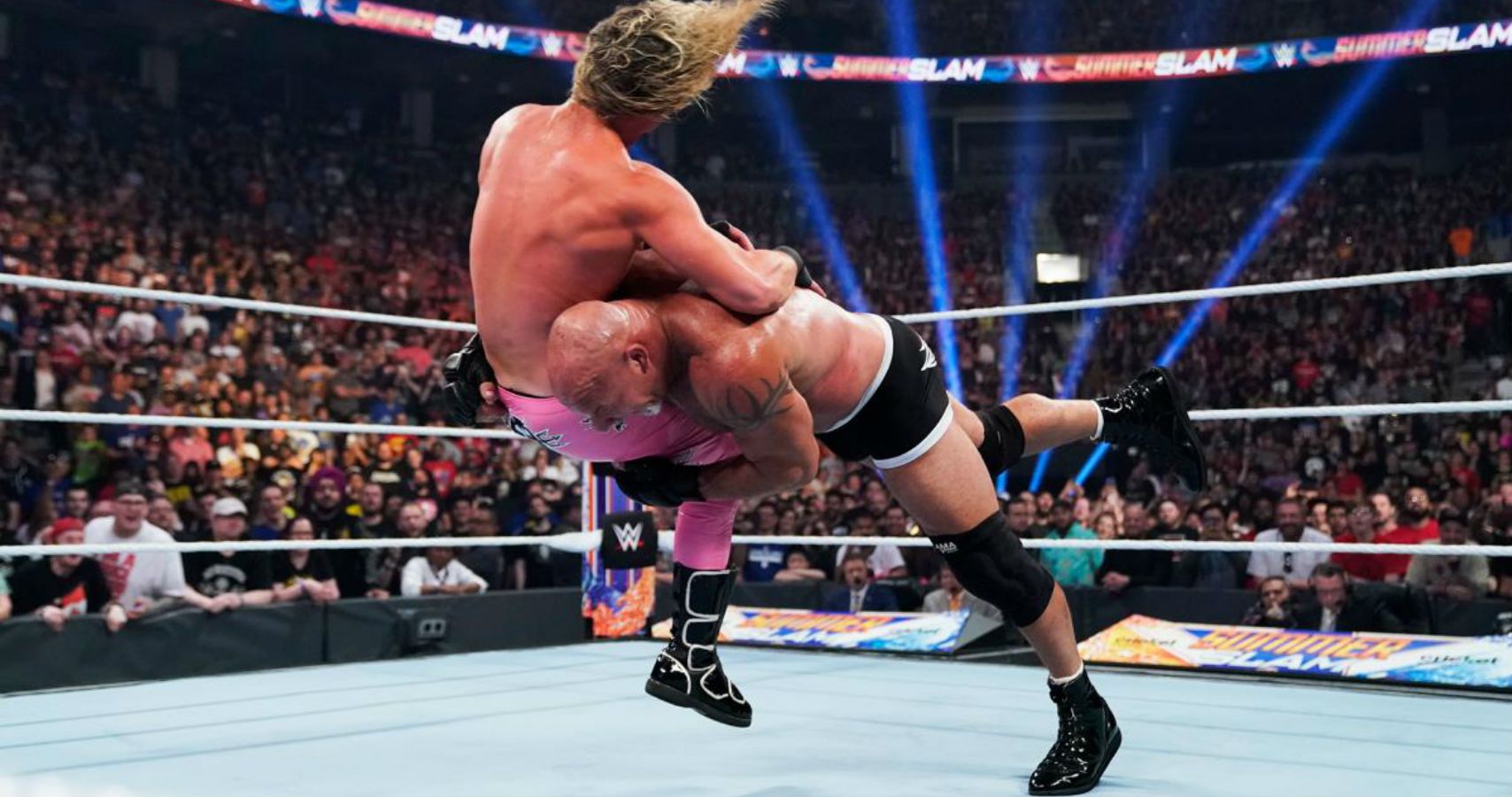 I saw lots of complaining about the Goldberg/Dolph Ziggler match, but I thought this was just what needed to happen.  Dolph Ziggler does not get enough credit because he made Goldberg look like a million bucks by selling those spears as if he were hit by a car.

It’s funny that the last two pics on the post are of wrestlers getting speared.  I may try to make it a theme. 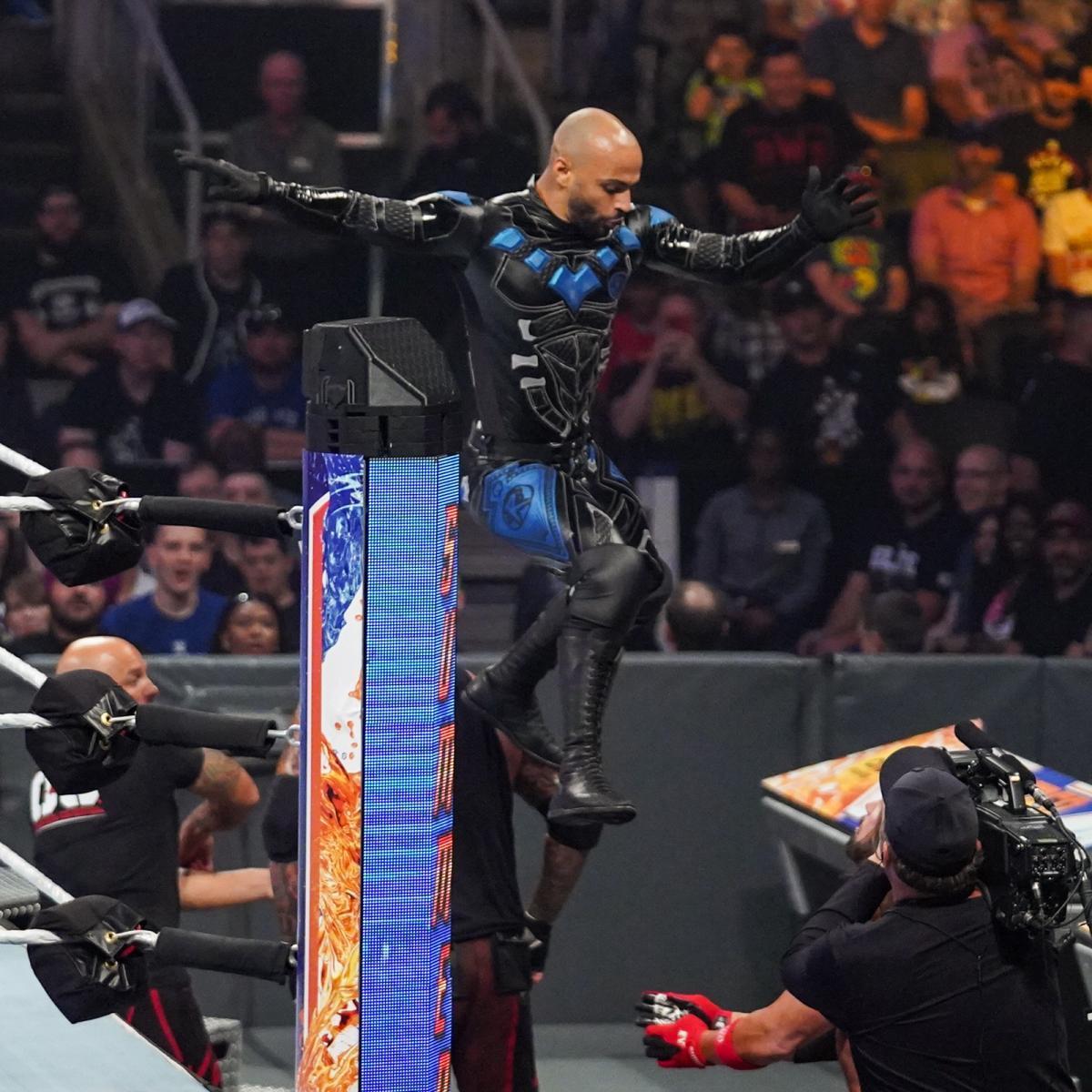 We had some matches in a row that were fine.  Kevin Owens beat Shane McMahon, which was highlighted by KO kicking Shane directly in the balls.  Bayley defeated Ember Moon in a decent match that had zero crowd reaction.  AJ Styles defeated Ricochet to retain his US Title.  The OC was involved quite a bit with distractions for Ricochet.  Ricochet came out in his Nightwing attire, which was cool.  Ricochet did some amazing stuff too.  At one point, he stepped across the shoulders of both members of the OC to hit a hurricanrana on Styles on the outside of the ring.  It was something we have never seen before.  There was a great finish to that match too as AJ caught Ricochet doing one of his flips and turned it into the Styles Clash finisher.

Charlotte Flair defeated Trish Stratus in a compelling yesterday vs. today match-up.  Trish was performing in front of her hometown crowd and they really worked a solid match.  Charlotte was able to get Trish to tap out from the Figure-8.  This was advertised as Trish’s final match and she went out passing the torch to one of this generations best female grapplers.

Kofi Kingston vs. Randy Orton was a disappointing finish for almost everybody as they were both counted out.  The countout seemed to happen incredibly fast too (especially when you compare how much time Brock and Set would be outside the ring later in the night).  The crowd did not seem to be into the match that much as they had several derogatory chants during the match and chanted “Bull$^%t” after the countout.  Clearly this feud is not finished. 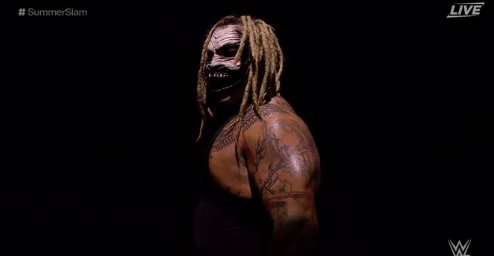 The last two parts of the card were easily the best.  Bray Wyatt debuted his new Fiend character in the most horrifying way possible.  The new entrance was frightening and enthralling.  He carried a lantern down to the ring that looked like it was the severed head of the previous rendition of

Bray Wyatt, with the light coming out his mouth.  When the camera zoomed in to it, I legitimately said, “What the hell is that?” New music, a metal interpretation of the Wyatt Family theme was absolutely perfect.  Bray crushed Finn, who did get a touch of offense when Bray appeared to be having a mental struggle with himself.  As if the happy, Firefly Funhouse host Bray was fighting against the Fiend.  It did not last long and The Fiend put Finn down with the Mandible Claw.

This Bray Wyatt character is MONEY!  There will be so many things the WWE can do with Bray that I really hope they do not ruin it.  Rumors indicate that Bray Wyatt did much, if not all, of the creation for this character and, if that is the case, it shows how creative wrestlers can be. The main event was tremendous as well.  Seth Rollins defeated Brock Lesnar for the Universal Championship.  The build to the match had been absolutely terrible and was threatening to completely derail the career of Seth Rollins.  You could hear how much he had been hurt as, when Seth hit the ring, the reaction to him was split, with a lot of boos being heard.

However, Seth did exactly what he had to do, and he won over that crowd once again.  Brock grabbed Seth and gave him a German suplex, except Seth landed on his feet, hit Brock with a superkick and then a stomp, and got a two count immediately.  Brock got back in control and beat on Seth a bit.  One of the best moments was when Brock picked up Seth by the tape that was around his waist for the damaged ribs and swung him by it. 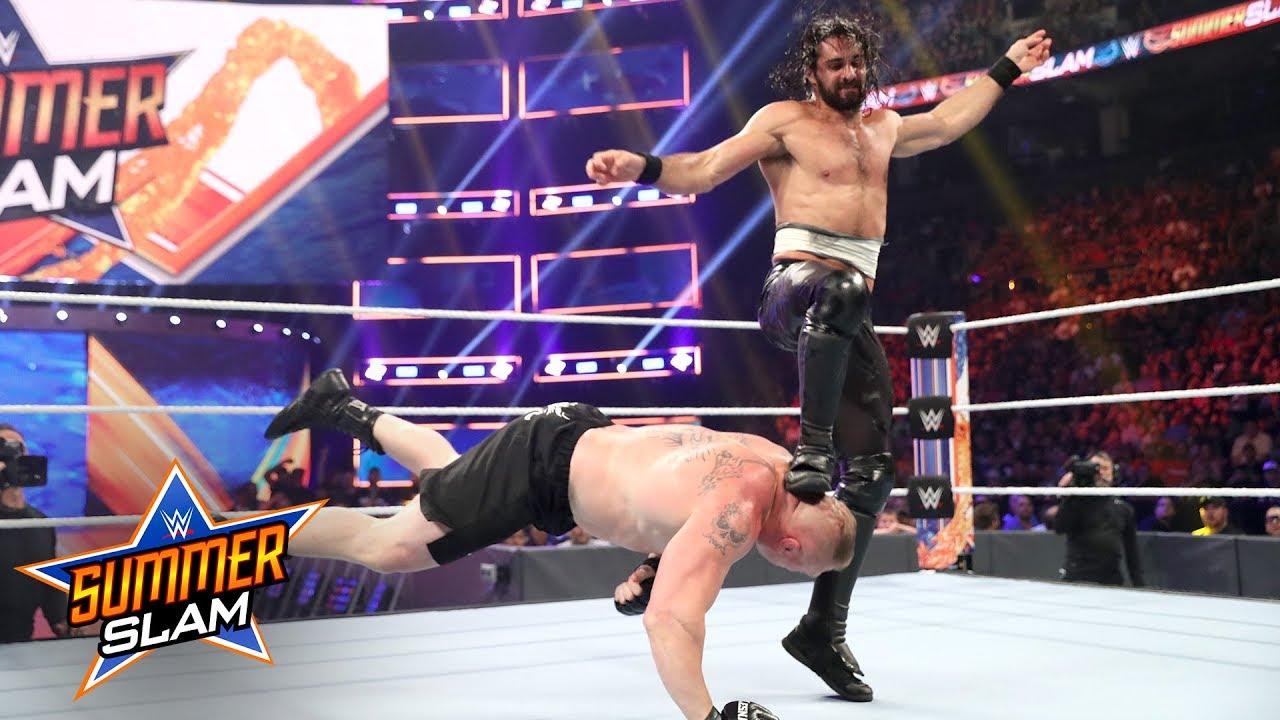 Seth reversed Brock outside the ring and rammed him into the ring post.  This led to Set doing a frog splash from the ring post into the broadcast table. The frog splash looked just brutal to both competitors.  I thought Seth may have knocked himself out because he hit his own head right into Brock’s shoulder.

Seth wound up hitting a third stomp on Brock and pinned The Beast to become Universal Champion for a second time.  I will admit, I popped huge when he pinned Brock as did that entire audience that had booed him when they started.

The main event and the debut of the Fiend was as good of a section as the WWE has done this year.  The rest of the card was good to great, with only the finish of the WWE title match being a clunker.

Seth Rollins seemed to have saved his character, which had been tarnished terribly by the WWE in the build to the event.  Hopefully, they have learned their lesson after Seth’s previous title run (no more Baron Corbin, please).

Where does Bray Wyatt go from here?  Rumors have Finn Balor taking some time off, but the eventual Fiend vs. Demon match is unavoidable, isn’t it?

Big shout out to the NXT Takeover match of Adam Cole vs. Johnny Gargano from Saturday.  Insanity.

I want to know more about the Roman Reigns mystery.  Is Daniel Bryan the mastermind behind it?

SummerSlam successfully made me wonder what the WWE is going to do next and I am excited to see RAW tonight and that means the company did their jobs. 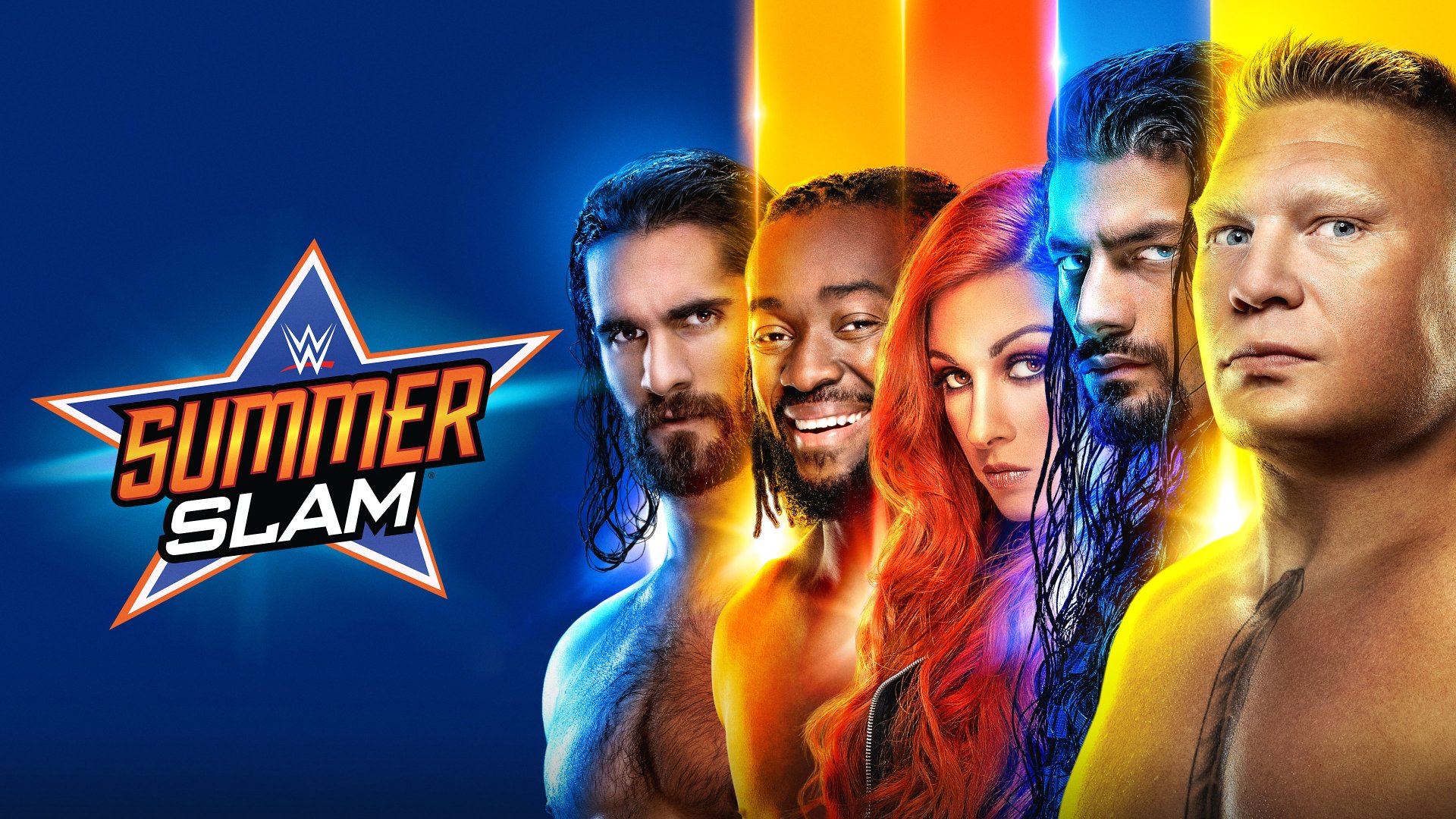