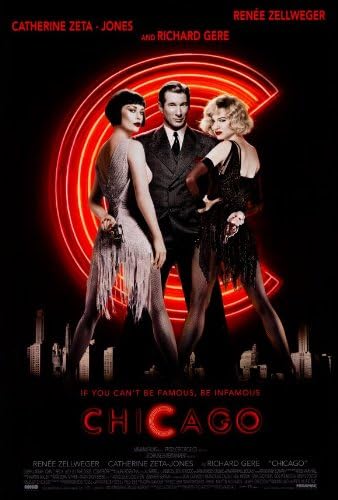 I have been looking forward to the arrival of Hamilton on Disney +, which is coming tomorrow and, to get in the mood, I chose to pick out a musical to watch.  After scanning through the list of musicals on Vudu, I stopped at the Academy Award nominated Chicago from 2002.

I had enjoyed Chicago when I saw it when it first came out and I especially enjoyed much of the soundtrack.  Although I prefer the version performed on the stage by Bebe Neuwirth, All That Jazz is a centerpiece of the show, here sung by Catherine Zeta-Jones.

Roxie Hart (Renee Zellweger) was a wannabe star who attempted to use her body and sex to get ahead.  On the night that headliner Velma Kelly (Catherine Zeta-Jones) killed her sister and husband, Roxie began an affair with Fred (Dominic West), who said he had connections.  When she found out that he was lying about that, she ends up shooting him dead.

Roxie wound up on Death Row with Velma.  While there, she pilfered Velma’s famous attorney Billy Flynn (Richard Gere), as they battled with each other over which case could be more big time..

The music in Chicago is fantastic and the dance routines are amazingly choreographed.  The design of the sets and each musical number was spectacular.  The film has a definite feel of a stage show.  The costumes were stand out and worked in every scene.

The three main stars of the film were on fire.  Renee Zellweger, Catherine Zeta-Jones and Richard Gere were amazing together and entertaining as these over-the-top characters.  There was also a impressive performances from John C. Reilly as Roxie’s sad sack husband Amos and Queen Latifah as prison guard Matron “Mama” Morton.

I did not expect to like this as much as I did the first time I saw it and this time was just as entertaining.  It certainly Razzle Dazzled me.