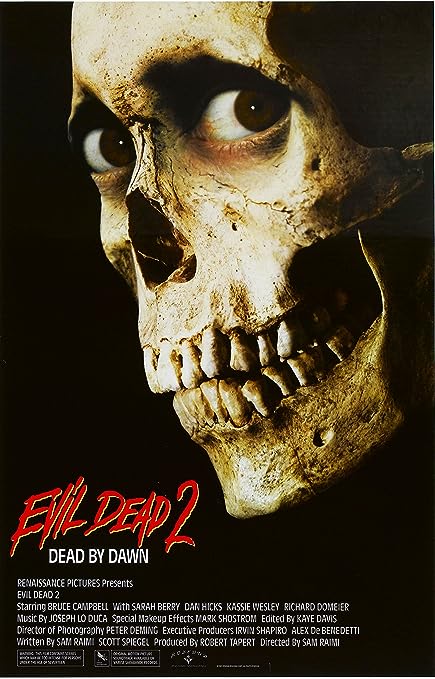 I came late to the greatness that was Starz’s series, Ash vs. the Evil Dead, but once I found it, I watched every over the top minute of the blood soaked, cornball horror series.  So with the October Horror Binge having one week remaining, I decided to revisit the movie origin of EYG Hall of Fame character Ash Wiliams.

And while Ash made his first appearance in Sam Raimi’s Evil Dead, the character whom would eventually become the Ash we know and love truly took shape in the sequel to that movie, Evil Dead 2:  Dead By Dawn.

Evil Dead 2 is truly a mix of horror and comedy, unlike anything seen before.  I remember not being the greatest fan of the original Evil Dead movie, this sequel really takes the genre and turns it upside-down.  There are some expertly designed scares here, but also some amazing campy moments that seem to work beautifully together.

Of course, everything with Ash depends on the unbelievable Bruce Campbell.  Campbell brings a devilish, overextravagant style with which he has become synonymous.  This material simply does not work without Campbell’s over expressive facial features and his ability to deliver silly lines of dialogue with complete sincerity.

This is the film where Ash loses his hand, gains the chainsaw and starts becoming the monster fighter that he is in the epic series.  And that is just great.

The ending of this movie is a huge cliffhanger that leads directly into Army of Darkness, Raimi’s next in the Evil Dead trilogy.  He had successfully taken the gore-fest of the original Evil Dead film from cabin-in-the-woods horror genre to comedic horror effortlessly.  Few characters worked better in this surroundings as Ash Williams.

Evil Dead 2: Dead By Dawn is a lot of fun and it knows what it is.  It is a serious story that knows how to not take itself too serious, which is something that many movies cannot accomplish.