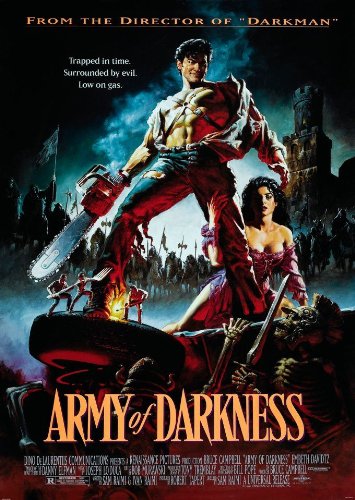 I had no idea what Army of Darkness would be.

I watched it and I am still not sure exactly what Army of Darkness was.

All I know is this is the Ash Williams that I fell in love with during Ash vs. the Evil Dead TV show in all his over-the-top, campiness, weird comedic humor goodness.

The character of Ash has come a long way since the original Evil Dead film.  Along the way, he became a kick ass hero with a chainsaw, a robotic hand and a boomstick.  All the while being played with a cheeky goodness by the one and only Bruce Campbell.  I said it before, but Bruce Campbell is the only actor that could get away with this kind of role.

Ash, at the end of Evil Dead 2: Dead By Dawn, found himself transported to a different time and plopped down in the middle of a war with humans and the Deadites where he must retrieve the Book of the Dead, the Necronomicon, in order to get back home.

Sam Raimi had changed this trilogy from a cabin in the woods horror film to a horror/comedy that appeared to owe a lot of its inspiration to the original Clash of the Titans.  The effects looked very much like the 1981 sword and sandals monster fest which was a personal favorite of mine as a youth.

Ash now is the character that I knew from Ash vs. the Evil Dead TV show from Starz.  This was where I was truly introduced to Ash and it was interesting watching how he developed over these three movies into that character.

While this is more of an action/adventure sci-fi epic than horror, there are still traces of the horror genre in Raimi’s third film of the trilogy.  It is ridiculously funny and silly much of the time, but it is intended to be this way.  I am not sure how I would have felt if I had not seen Ash vs. the Evil Dead first and then went backward to the trilogy, but, after already loving this character, Army of Darkness is a awesome end to the film series.

And the October Horror Binge rolls on…