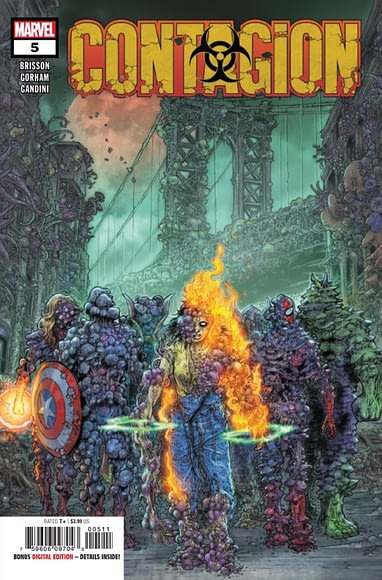 I have really enjoyed the five-issue limited series from Ed Brisson and Adam Gorham called Contagion.

A strange fungus creature arrived on Yancy Street and started infecting people, including three-fourths of the Fantastic Four and several other major Marvel Universe heroes.  It wound up to be in the court of the Moon Knight and a young iron fist named Pei to save the day.

I enjoyed the pacing of the story and the art was top notch every issue.  But, if I am being honest, there is one thing that I enjoyed about this series way more than anything else…

This was a Marvel five issue limited series that did not require 20 different spin offs/crossovers for the story to be told.  It did not cross over into the Fantastic Four series or the Avengers series or the Doctor Strange series.  It was five issues, it told a self-contained story and it was glorious.

I understand the business aspect of comic books, but the fact is, most if not all of these crossover issues are unnecessary for a story.  In fact, several of them feel superfluous.  Right now, I have not read several of the Absolute Carnage crossovers because they would have taken place before the main series and I already know what would have happened.

Contagion had none of this.  Just five issues of good storytelling, strong character work and an uncertain future that brought some stakes to the comic.

I would love to see more of these kind of event series from the House of Ideas and keep those bloated crossover events such as Absolute Carnage, 2099, War of the Realms limited to once or so a year.

I know I am dreaming.  But read Contagion.  It is solid work and worth the time… and easy to do.