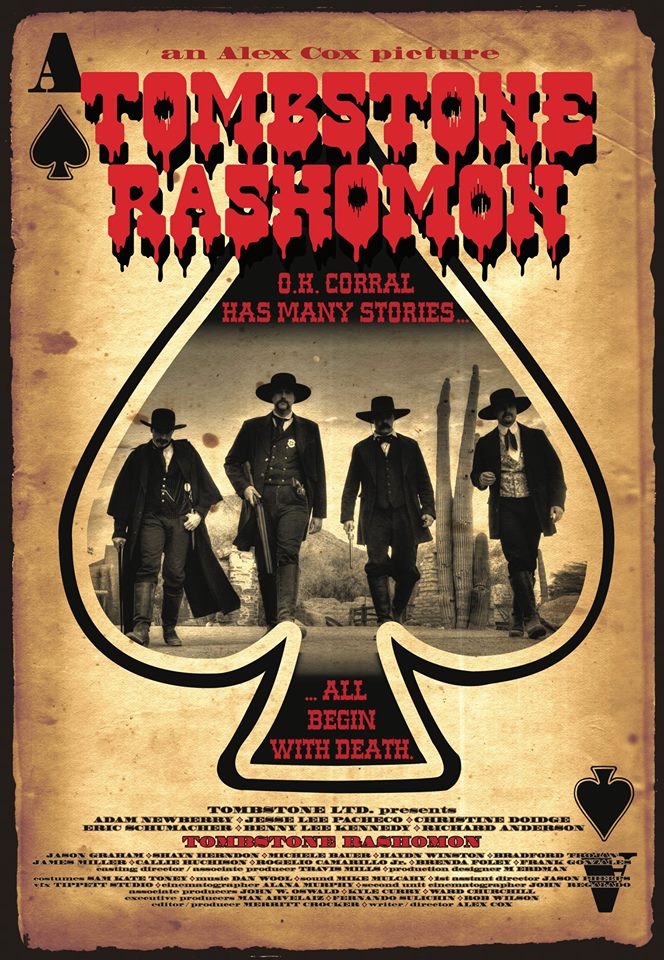 I received an e-mail from TriCoast Entertainment, a company in California, offering EYG an opportunity to review a movie called Tombstone Rashomon.  The e-mail described it as a “Western mockumentary” filmed in the style of the Japanese classic Rashomon, from director Akira Kurosawa.  I had been looking recently to increase my exposure to the Western genre and this sounded intriguing.  I agreed to review the film, which looked to have been originally released in some form around 2016/17.  It was directed by Alex Cox (Sid and Nancy, Repo Man).

To prepare for this film, I did watch the classic Rashomon by Kurosawa, which introduced the concept of the Rashomon Effect.  The Rashomon Effect is a term that indicates that different eye witnesses might give different stories of the same event, whether it be because of a differing point of view or an attempt to make oneself look better.  This has been used as a point in many movies since Rashomon.

In this mockumentary, the true life story of Tombstone, specifically, the “Gunfight at the O.K. Corral” is told through a series of interviews with the survivors.  According to the film, a time traveling video crew arrived in Tombstone, but they arrived one day too late so they were forced to tell the story of the gunfight via the survivors’ eye witness testimony.  This was a problem.

The science fiction aspect of this mockumentary is kept at the bare minimum, and, though the concept is captivating, I have to wonder why it was used.  There were a few moments of futuristic storytelling (such as the appearance of a police car during one fo the recounts) that felt jarring.  The voice of the interviewer (Susan Sebanc) had a robotic tinge to it, which was an odd choice.

Beyond the strange use of sci-fi, the interviews were remarkably compelling and these character were truly brought to life by the writing and the solid performances of the able cast.

The questions posed by this time-traveling crew were meant to get to the bottom of what actually happened on October 26, 1881 in Tombstone, Arizona Territory, United States.  There was a violent confrontation between local lawmen Wyatt Earp (Adam Newberry), Marshal Virgil Earp (Jason Graham), Morgan Earp (Shayn Herndon) and John “Doc” Holliday (Eric Schumacher) and the outlaw band the Cowboys which included Ike Clanton (Benny Lee Kennedy), brothers Tom (Bradford Trojan) and Frank (Hayden Winston) McLaury, Billy Claiborne (Rogelio Camarillo Jr) and Billy Clanton (James Miller).  The Earps, who had had various issues with the Cowboys in the past, were on their way to disarm them.  Local sheriff John Behan (Jesse Lee Pacheco) attempted to keep the violence from breaking out, but turned into a bone of contention with a contradictory story.

The interviews in this mockumentary do a fantastic job of setting up the story and creating the uncertainty around exactly what had happened on Fremont Street in Tombstone.  They created moments of characterization allowing the audience to make their own determination at the character’s biases and the accuracy of their tale.  For example, Sheriff John Behan is shown in a light that makes me question certain details of his story.  I thought actor Jesse Lee Pacheco was one of the top interviews in the film.

Then there was the interview featuring Kate Horoney (Christina Doidge), aka Big Nose Kate, which detailed her time with Doc Holliday including a time when she had been plied with alcohol by the Sheriff and Milton Joyce (Barney Burman) in an attempt to get her to sign an affidavit against Holliday for crimes including a stage coach robbery.  This brought some extra color to the character of Holliday, but Kate’s constant use of the feminine pronouns “she” and “her” and her references to husbands being “wives” was somewhat confusing at first.  It eventually became humorous, and it was clearly meant to be a joke, but it did cause me some initial uncertainty about what was being said.

The mockumentary was well filmed and had some wonderful Western scenery.  The imagery of the time was on display throughout and really worked well with the story and the different versions being told.  The film was also effective when it flashed from current day Tombstone to 1881 Tombstone, keeping the feel of legacy in place.

After watching the mockumentary, I did some research on the Gunfight at the O.K. Corral and I found that the film was extremely accurate in just about everything presented, including the differing stories.  It had an extremely correct historical accuracy, of course, with the exception of the time travel element.  I was very impressed with how they wove the different eye witness testimonies together to create a reasonably valid historical record (albeit with a time traveling crew and a police car).

I found Tombstone Rashomon to be an effective and engaging use of the mockumentary style, creating engaging characters and illustrating their stories in a manner that both serviced the characters and helped to inform the mysteries surrounding the historical narrative.  All performances were extremely well done and helped form these real life and, sometimes, famous people into gripping, fascinating characters.

One thought on “Tombstone Rashomon”