WWE Backlash happened on June 14th and the show was highly considered a mixed bag.  There were several weird finishes and just a completely insane cinematic “match” between the Street Profits and the Viking Raiders.  However, the main point I want to discuss today is the match between Randy Orton and Edge.

Yes, the “Greatest Wrestling Match Ever” as the WWE promoted, setting a bar that was invariably going to be impossible to reach.

Here was the problem, highlighted as such by my viewing of Twitter during the show.  The wrestling fans had approached this with such negativity that there was no way Edge-Orton was going to be considered in the argument.  The fans came into the match with a closed mind, and that was because they do not like WWE trying to tell them how to think. 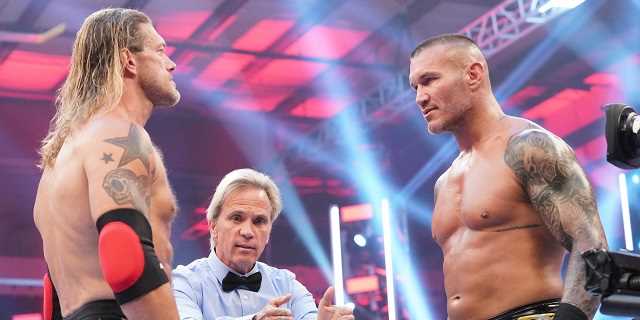 The fact is that this match was absolutely spectacular and should be in consideration for the Match of the Year at the end of 2020, but did it reach the status of “Greatest Ever?”  I don’t know, that is all subjective.  And because it is subjective, the fans had their opinions already made up.

There were also tons of “Greatest Ever” jokes on Twitter leading up to the match and they were really unfunny.  I saw several tweets about people hating on the match, which I find difficult to believe, since it was an amazing work.

Another load of anger came from Twitter about the crowd noise that was piped in and the camera shots that were experimented with.  It became just one more thing that the vast audience could snatch onto to fill their hate.  I was not bothered by either.  In fact, I appreciated the WWE trying something different to enhance the viewing experience of the match.  The crowd noise and the camera shots had some drawbacks, but overall I think it went well.

The best part of the enhancements was the inclusion of the ring introduction from Howard Finkel, who passed away earlier this year.  The lights dimmed and there was an MSG microphone dangling in the ring and we heard a recorded intro for both wrestlers in Howard Finkel’s distinctive voice.  It was a truly wonderful honor for “The Fink” and gave the match that extra gravitas.

My own personal viewing of the match was hampered a bit by the news that had come out that Edge had injured himself during the match.  Reports of Edge tearing his tricep came out and distracted me as I was watching the match with an eye on seeing the moment when it happened.  If that news had not slipped out (the match was reportedly filmed on June 7th and the WWE has been keeping Edge’s injury under wraps since), I thin my own enjoyment of the match would have been elevated.  That is not the fault of the show or of the WWE, it just was one of those things.

I loved the story that these two told as the match moved on with the use of so many other moves as homages such as the Unprettier, The Pedigree, The Rock Bottom, The Three Amigos, The Olympic Slam.  It was as if they were including all of these other wrestlers in their “Greatest Match”.

In the end, Randy Orton won with a low blow and then a Punt, a move we have not seen Randy use in years.  It was a dramatic finish to a match that went over 40 minutes and had two men work extremely hard.  The match started slowly (which people on Twitter also complained about) but built up to the ending very well.  And after the pinfall, Randy got down into Edge’s face and told him to go home to Beth and their children and for Edge to tell them that “Uncle Randy says hi.”

Great storytelling.  Great physicality.  Blood.  Drama.  Everything here says this was a 5 star match.  Plus, when was the last time the WWE so openly promoted that this was a WRESTLING match?  Not sports entertainment, but wrestling.  It has seemed as if the word wrestling is a dirty word to Vince McMahon and the head honchos, but there it was, front and center in the promotion for the match.  That has to be a positive thing.

Was the whole tagline hyperbole?  Of course it was.  Was it meant to just stir up the trolls?  I don’t think that was the sole reason, but I am sure the WWE saw that as a benefit of the tagline.  It was never going to live up to such a brazen claim, but it was most likely the best match that Edge and Orton could possibly put together.  I mean, remember, Edge has not had a proper wrestling match for over 9 years, let alone one that went 40+ minutes.  There would be plenty of active superstars who would be blown up way before the 40 minute mark.

I certainly hope Edge is not injured as badly as it sounds.  He carried on with the match and I never noticed where the injury happened, so you have to respect him for that.