Every year come this time, there are a list of “snubs” from the nominees for the Emmy Awards.  It is unavoidable considering we have so many new outlets providing us with content for television.  Netflix.  Amazon.  Hulu.  HBO. FX. Showtime.  BBC America.  There are a ton of networks on both cable and streaming sites that make narrowing a list of nominees down truly a daunting task.

There are some drastic picks that I believe should have received an Emmy nomination today when they were announced, and I am going to express them…just because.

To me there is no bigger snub than this one.  Bates Motel has been quietly one of the best shows on television, bar none.  The show itself should have been nominated in Best Drama, but I could almost live without that… but Freddie Highmore, who plays Norman Bates, and the sublime Vera Farmiga as Norma Bates were breathtaking this season.

Especially with the shocking end to this season.  I would also throw into the consideration for Best Supporting Actor in a Drama Series Nestor Carbonell as Sheriff Alex Romero.  The relationship between Norma and Alex was one of the biggest, most charming surprises of the season and led to some of the most tragic and heartbreaking moments of the series.

Jessica Jones was a special series on Netflix.  It was more than a superhero show.  In fact, you could remove the superpowers of Jessica Jones and you could still have a tremendous show about a damaged woman trying to move on with her life after being a victim.  The superpowers were just a part of the story.  And Krysten Ritter played Jessica Jones’ suffering and her alcoholic PTSD to the tee.  Her relationship with Luke Cage was fun and uncensored.  There were so many things that Emmy voters look for in this series that the only thing that makes sense is that this is a comic book series and they do not get nominations from the stuck in the mud Emmy voters.

Case in point.  This is the second brilliant performance by an actor as a Marvel villain in a

Netflix show that has been ignored by Emmy voters.  There was absolutely no excuse for Vincent D’Onofrio to be skipped over last year for his role as Wilson Fisk.  So many layers… and David Tennent is arguably even better.  Kilgrave was essentially a rapist, yet before the end of the season, you found yourself rooting for him, understanding the pain and the desires the Purple Man had.  Tennent was tremendous and deserved an Emmy nod.

I dare you to watch Daredevil Season 2 Episode 4 with Frank Castle confessing his sins to Daredevil at the cemetery and not get the feels.  Jon Bernthal made this character his own, despite the failure of several incarnations on the big screen.  He infused Frank Castle with so many emotions that you could feel for this mass murderer and relate to him.  He was so perfect as the character that the show suffered when he slipped into the background.  Bernthal suffered the fate of the Emmy’s superhero prejudice.

My supporting actor in a drama category would look very different than the one that the Emmys rolled out because I would have had to have included Christian Slater from Mr. Robot.  The basis behind the biggest mystery of the first season, “Who is Mr. Robot”, Slater was spot on for every moment.  Though it is great that Slater’s scene partner Rami Malek receive a nomination and the series got one too, Slater was so vital to bring this series to life that ignoring him was criminal.

This is first time in years that Stephen Colbert was overlooked.  This is also the first year that Stephen Colbert is hosting CBS’ Late Show instead of the Colbert Report.  Coincidence?  Colbert has found his footing as David Letterman’s replacement and it seemed that he belonged on this list.

She did win the Golden Globe.  That just goes to show how little the Academy thinks of the Golden Globes.  Replacing divine diva Jessica Lange was a huge challenge, but Lady Gaga impressed people with her vampiric vamping and the drastic bloodlust (literally) from American Horror Story: Hotel. 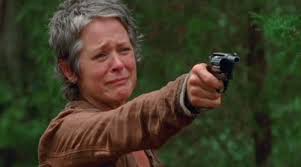 Every year, The Walking Dead is ignored.  Now, I will freely admit that this past season of TWD was not near what the show has been.  There is nothing as criminal as ignoring Melissa McBride’s performance from the previous year as Carol made Lizzy look at the flowers.  However, there is no denying that the show is still one of the most popular shows on television and the continual ignoring of the show is wrong.  Carol really deserved it last year.

Orange is the New Black

The Netflix series is another one that has had up and down seasons, but this seasons penultimate episode featuring Poussey was one of the best hours of television this season.  Why would the Emmys ignore this heart wrenching episode with the great performance by fan favorite Samira Wiley?