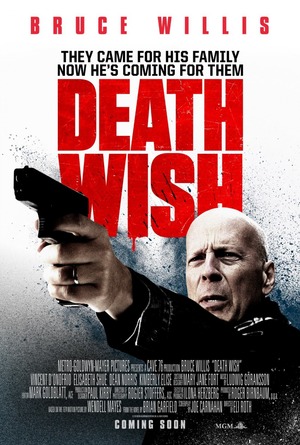 I had not seen the 1974 film Death Wish, starring Charles Bronson so I did not have that crutch coming into the new version directed by Eli Roth and starring Bruce Willis.  I do plan on watching this version late4r this afternoon, but it did not affect my viewpoint on the film.

I will say that I had very low expectations coming into the film.  I am not going to comment on the pulse of the nation after the most recent school shooting.  That should not go into the review.  Neither will my own personal opinion on guns and the ability to easily get them.

Bruce Willis plays a surgeon named Paul Kersey, whose wife gets killed and his daughter is put into a coma after a house robbery that turns deadly.  Frustrated that the police were getting nowhere with the case, Kersey winds up taking up a gun, putting on a hoodie and going onto the streets of Chicago looking for vigilante justice.  Dubbed “The Grim Reaper” by the press, Willis continues hi search for the men who murdered his wife.

The is nothing original here.  We have seen this revenge story countless times, and done in a considerably better way.  The Netflix Punisher series just recently was way better than this despite covering many of the same tropes and issues.  The film could have taken itself in several interesting ways dealing with loss or dealing with how grief can change a man, but it really only takes the most surface level of story.

And a surface level story is fine if you have other things with it.  Unfortunately, a second major drawback here is Bruce Willis.  I love Bruce Willis, but he has not had a great performance in a while (maybe since Looper).  Paul Kersey has zero development of character.  When we first see him, he is called from one surgery to head to E.R.  He walked into an operation room where a police officer had multiple gunshot wounds and was flatlining.  He put his fingers to the cop’s neck and pronounced him dead without doing anything to him.  Then, he went and told his partner that they did everything they could.  I immediately perked up because that was simply not true so I thought maybe this guy was damaged somehow.

However, we then see him at home where he has a beautiful wife and a beautiful daughter who has just been accepted to a college in New York.  Willis looks to have a perfect life.  So why was he so unemotional at his job?  Is it just that he has seen so many gunshot wounds that he has become hardened to them?  You would think that we would then see that in the film, but it is never addressed again.

In fact, no one has a character arc in the story except for Kersey’s brother Frank (Vincent D’Onofrio), who changes his life after his sister-in-law is killed.  However, Frank is treated like crap by his brother.

There are some fun moments of violence that are put together like an old 1980s action film intended to gain an applause response from the crowd.  These are done fairly well.  There are some spots throughout that, if you turn off your brain, you can find entertaining.  However, there are also moments of extreme humor that is absolutely unintentional.  One of the robbers was going to tie up daughter Jordon (Camila Morrone) and he was searching through the kitchen cupboards.  He even stopped to say, “Where is the rope?”  I almost fell off the seat.

This was not as horrendous as I thought it was going to be, but it is not a good movie.  There is really no character arc at all, little plot, and only passably entertaining action.  Bruce Willis is a much better actor than he shows here.  There is zero subtlety in a story that could have had plenty.  Eli Roth is more interested in the in your face aspect than any kind of character study.  The rebooted Death Wish is not worth your time.