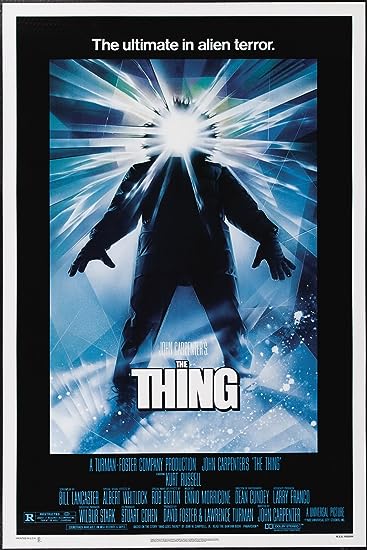 John Carpenter created one of the most iconic horror movies of the 1980s when he directed The Thing, starring Kurt Russell.  My friend Chris had recommended I watch this as part of my rewatch binge weekend, and I told him that I had never seen the original.  He responded with shock.

So, seeing that it was available on Amazon, I decided that I would go ahead and watch it.  I had seen the prequel that was made in 2011, but I was not a fan.  It ended with a scene of a dog running through the snow in Antarctica and I did not understand.  However, I do now after seeing how Carpenter’s film starts that way.

The Thing creates a remarkable tension and fear by first, isolating the group and amping up the claustrophobic feel, and then placing them in a situation where paranoia took over.  You did not know who you could trust.  You did not know which one or ones of the group were already a part of this monster.  Trapped in this blizzard without any access to the outside world, the group had little choice but to turn on each other.

There is another aspect being examined here besides the result of isolation and paranoia.  The fact that this is an all-male outpost allows the film to examine the effect of male masculinity on the situation.  Sticking out heir chests and gritting their teeth, these men did not want to show any signs of lacking their manhood and the situation placed that manhood in jeopardy.

Kurt Russell is fantastic in the film.  Russell has appeared in several of Carpenter’s movies, but few with as solid of work as The Thing.  Keith David, who I just watched last night in They Live with Roddy Piper, was here also, bringing a load of attitude and questionable behavior.  Wilford Brimley also had a memorable role here, looking much different than the mustached older gentleman that I remember.

Yes, many of the shots of the creature looked kind of silly and may not have aged well but the practical effects actually did make me jump a couple of different times.  There is something about the all-practical effects and no CGI that make The Thing even more effective.

A remake of a 1951 film, The Thing is considered one of the genre’s best examples in the 1980s.  The film is a great example of the use of claustrophobia to make the audience feel enveloped and helpless and, when you throw in the paranoia, you have a fantastic horror film.   Thanks Chris.