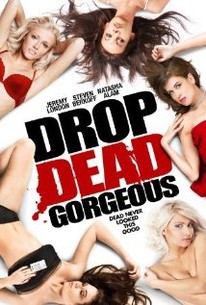 I was watching a Movie Trivia Schmoedown episode and there was a question about a movie called Drop Dead Gorgeous.  The question asked about plot details and sounded interesting to me so I went looking for it.  I found it on Amazon and so I was excited.

As I’m watching the mockumentary at the heart of the movie, I was thinking to myself that this did not remind me much of the question in the Schmoedown.  Pushing that aside, I kept watching until the end.  Then I went to Rotten Tomatoes and this film had no rating on the site.  I was confused even more.

I saw another movie named Drop Dead Gorgeous, but it had been released in 1999.  That was the film the Schmoedown question had been written about. This one was an entirely different movie.

This film was a mockumentary about a filming of a model for the new campaign of fashion star Claudio (Steven Berkoff).  Claudio had chosen young and unknown model Cynthia (Ivy Levan) as his new “girl” and she dove into the life of a model, including drugs.  Unfortunately, Cynthia overdosed in the middle of a photo shoot.  The problem was that her untimely death did not stop the shoot from continuing.  In fact, her death actually made her even more in demand.

There was some real dark comedy here and I did not mind much of it, but the characters were so out of their minds that it made much of the satire involved to be too crazy.  I started wondering why the dead body of Cynthia didn’t start going through the stages a dead body would go through, but perhaps the film was not interested in any sort of truth.

There were many moments of dark humor here.  Some worked but a lot of it was kind of over the top.  At first I thought there was going to be a mystery involved int he death, but that was not a focus.

The film was scathing towards the modeling world, no doubt.  The way they treated Cynthia’s dead body as a lump to be bent and taken advantage of was shocking.  It was certainly saying that this is how real living models are treated.

The problem was there was just too cartoony characters involved here that overtook the message.  The film was watchable, but it could have been extremely more biting than it turned out to be.

Maybe I have to keep looking for the other Drop Dead Gorgeous.