We knew it had to happen sooner or later.  I mean, he was 95 years old.  And yet, with the news today that Stan Lee, the mighty creator behind so many of the amazing, fantastic, uncanny, incredible, invincible, spectacular characters of the Marvel Universe, had died, I was caught surprised and shocked.

Stan Lee brought me personally so much enjoyment and pleasure through his words, adventures and characters that I have no idea the kind of person I would be had it not been for Stan Lee.  He inspired me.  He enthralled me.  He entertained me.  He was one of a kind.

I can remember back when I would read the Stan’s Soapbox near the end of each comic that I bought.  I desperately hoped to find something worthy of a No-Prize.  I loved his voice every weekend on Spider-man and his Amazing Friends.  Right up to the present day when part of the fun of a Marvel movie included keeping your eyes peeled for the obligatory Stan Lee cameo.

It is amazing how much a man can mean to you whom you never met.  I would have loved to have met Stan Lee.  His enthusiasm was infectious.  He was easy to laugh and his wry wit was wonderful (he always loved a little alliteration).

While I came to comics after his main run as a writer was over, his presence as Marvel Editor-in-Chief and the Face of Marvel was all-consuming.  It was so complete that even after Stan no longer worked for Marvel, he was still whom I pictured when talking about them.  Stan Lee was larger than anyone else.

Of course he was not alone in creating the Marvel super-heroes that would make such an enduring impact on my life, but I saw it that way.  With all due respect to Jack Kirby, Steve Ditko and the other amazing creators who co-created this new age mythology with “The Man,” Stan was such a powerful sun that his light cast a huge shadow on the others.

When Stan’s beloved wife of nearly 70 years, Joan Lee, passed away in 2017, there were fears that Stan may not be long for this plane of existence.  He made it another 16 months before he was gone.  I hope they are having a wonderful reunion.

Nothing was more inspiring to me than Spider-man.  Stan’s indelible contributions to the creation of and maintenance of Peter Parker is something that I will always be thankful for.  Peter Parker showed me what it meant to be a hero.  How to face your problems with humor despite the nearly constant bad luck that life heaps upon you.  How it is more important to transcend those around you.  How important life is…even for those who hate you and would do anything to hurt you.  I loved it every time Spider-man put his life on the line to save one of the villains because that is what a hero would do.  I learned so much from that character.  Thank you Stan for helping me grow to a man.

I am proud to have inducted Stan Lee into the EYG Hall of Fame way back in 2010 as one of my Wild Cards.  No one has ever deserved the tribute more.

And while it may never truly be ‘Nuff Said, I am going to end my tribute to “The Man” the way he ended so many Stan’s Soapboxes.

RIP Stan Lee.  Thank you.  You will be missed. 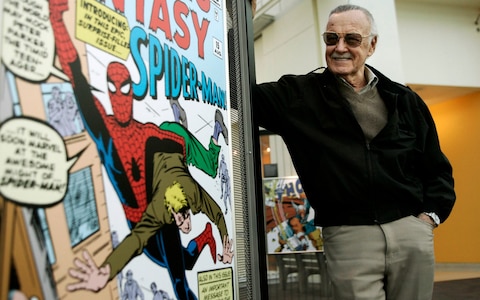