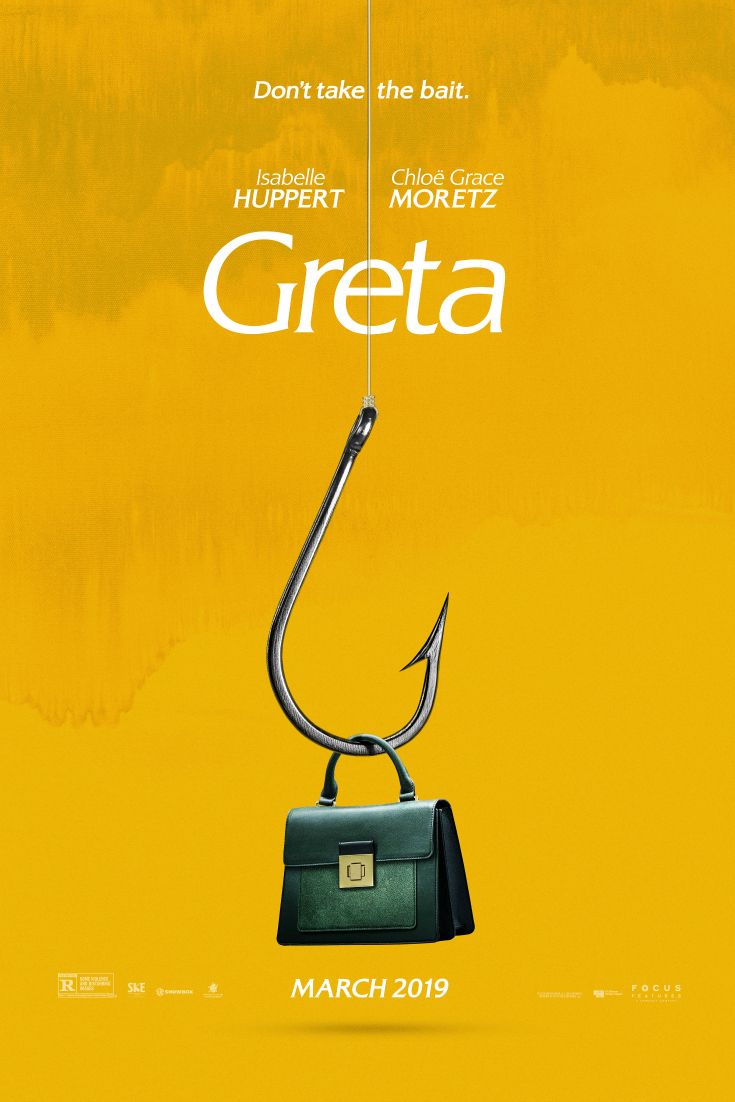 I was looking forward to this movie because I have liked the trailer and I hoped that it would give us something new and different.

Chloe Grace Moretz plays Frances, a young and desperately naive girl living in Manhattan.  She finds a handbag left on the subway and she wants to do the right thing so she returns it to the owner, Greta Hideg (Isabelle Huppert), a sad and lonely older woman.  They strike up a friendship, bonding over shared losses in their lives.  Then Frances discovers that Greta has been duping her and had planted the bag on the subway to try and lure someone into returning it.  At this point, Frances tries to end the relationship, but Greta has a different idea.

The movie started out solid and I had hopes that it would take things in a new direction. It does not.  Honestly, I saw a possibility to take this into a realm where it is Frances’ fault.  She really treats Greta poorly immediately after she discovers about what she had done and ignored the old lady’s pleas for forgiveness.  Had the film gone in a different direction here, I think we could have had something original and even emotionally satisfying.  But it didn’t.  Sure enough, we discover that Greta is considerably more bat-shit crazy than we thought and was more of a predator than was let on to at the beginning.

By this point, Isabelle Huppert stops playing any sort of subtlety to the character and just begins chewing the scenery.  The film turns into a cartoon at this point and things go truly stupid.  I hate when supposedly intelligent characters do STUPID things in a movie just because the plot needs them to do it, and the second half of Greta is one stupid move after another.  I did not understand half of the decisions that Frances makes or fails to do (especially this part because there are things that are obvious and she fails miserably at doing them).  And she is not the only one doing stupid things.  Her roommate (Maika Monroe), who I liked in most of the movie, and Frances’ father (Colm Feore), jump head first into the dumb ass moves as well.

Greta also seems to become super powered as she arrives in places that she shouldn’t be able to do and does things that she couldn’t possibly get away with.  Greta reminds me of Jason Statham in the Fast and the Furious franchise, suddenly appearing right where he needed to be to cause the most trouble. The police are completely incompetent and there is a private investigator that simply is a waste of screen time.

There was a neat use of a dream sequence that kept me off balance near the back half of the movie which I liked a lot.  More of this would have helped to balance out the movie.

While the ending does have some satisfying resolution, it also has some simply ridiculous aspects that you have to stretch credibility to accept.

With the acting talent involved and a well shot film, this had a chance to be something special, but, unfortunately, this became just another film of this type, where a friend is shown to be actually an obsessive crazy person.  There are a ton of these films from the 1990s and Greta falls right in line with those.  There are moments of enjoyment here, especially if you want to pretend like the film was trying to be purposely campy, but the stupidity and implausibility of everything that happens just took me out of the movie and ended with a huge disappointment.