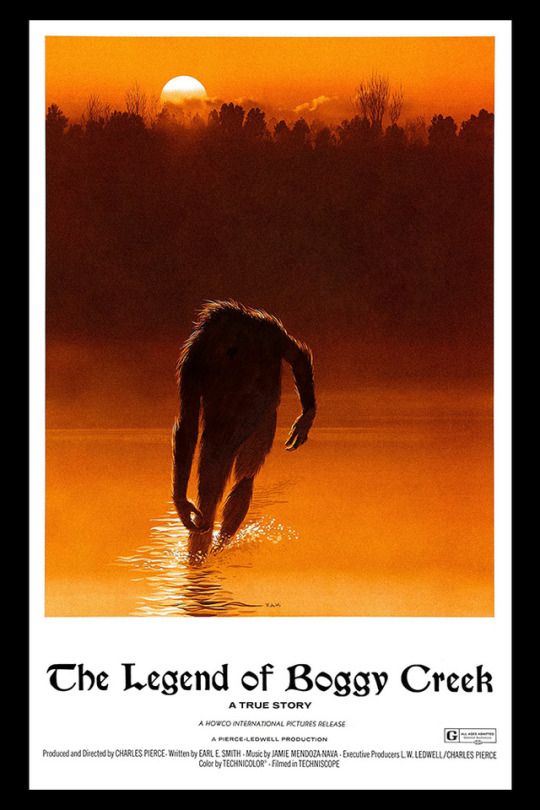 I have been looking for this movie for awhile.  It is a notorious movie filmed as if it were a documentary, and claims to be based on a true story, but it embellishes some of the stories of the Fouke Monster, a hairy man-like creature that lives in the swamp area of Boggy Creek near Fouke, Arkansas.

Some believers think that the Fouke Monster is related to the Sasquatch, but the film draws some notable differences, such as the number of toes.  The Fouke Monster is also shown to be fairly violent and reactive, whereas Sasquatch is usually shown as shy and reclusive.

There are some real-life people from Fouke in the movie, as they dramatize the legends of the creature that floated around the area since the 1950’s.  The acting certainly showed that in the film, but the ambiance of the “documentary” kept it from feeling too bad.  I get a better feel of this movie than I did with Birdemic or Manos.

The film actually does a decent job of creating mood and a feel of dread as the film progressed.  Everything from the music to the bouncy camera work created an atmosphere that was surprisingly effective.  The movie was put together by the community to take advantage of the news of the Fouke Monster.

I can see why this movie has become a cult classic, because there is a homemade charm to it.  Yes, the lack of real actors or any sort of FX budget hurts the movie, but it does an admirable job of overcoming its weaknesses.