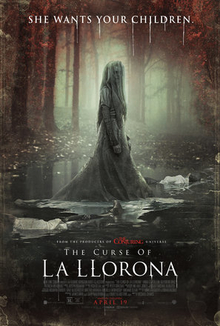 I was a bit surprised by this film as well.

One, I did not know that this was taking place in the Conjuring Universe of horror films that has been set up over the last few years with the Conjuring films, Annabelle and the Nun.

Two, I did not expect to like this movie much because I had heard a bunch of negative word of mouth surrounding it.

However, I liked The Curse of La Llorona more than I thought I would.

Yes, it is a predictable film and there is not much original that we saw here.  Yes, the plot is the basic haunted house plot that we get in most of this genre of films.  Yes, there are some stupid choices made during the third act that put a damper on what was happening (especially that back door bit).

I still found myself enjoying this movie.

I have always liked movies with kids in the action and I was very impressed with the young boy Roman Christou, making his feature film debut.  Christou, as Chris, was given a lot of heavy lifting to do with the story and he had a lot of emotions to play and I found him remarkably compelling.  I also thought Linda Cardellini was great as the mother Anna, who had to battle this horrible spirit to try and save her children.

The film started well and I liked the way Anna started off as a child endangerment social worker but I am not sure the film took that to the possibilities that it could have.

I was also not a huge fan of the character Rafael (Raymond Cruz).  They tried to use him to insert some humor into the story with some witty one-liners, but every line that was supposed to elicit laughter instead elicited groans and eye rolls.

Still, for whatever reason, much of what they did worked for me and the stuff that did not work, did not negatively reflect on my thoughts of the film.

It’s not a must see film, but if you do go, you should be fine.