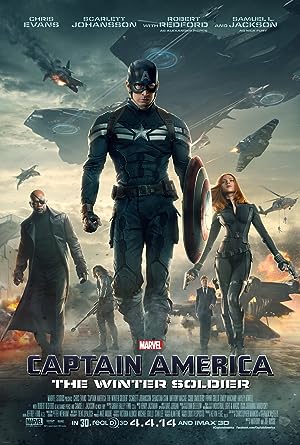 This is a perfect example of why Marvel Studios has been very successful with many of their film franchises.  The Winter Soldier is really not just a super hero movie.  It is a political thriller told with super heroes.  That allowed Marvel to tell all kinds of different stories within the genre of a super hero movie.  Heck, this even had Robert Redford in it.

This was also a major paradigm shift for the Marvel Cinematic Universe as the organization of SHIELD is shown to have been compromised by Hydra.  Since Iron Man, SHIELD had been shown to be on the side of the good, but now, after eight movies, we get a new reality.

We also get a new way to have solo hero movies.  This is a Captain America story, but within that story we get Black Widow, an introduction of Falcon, re-introduction of Bucky, and Nick Fury.  The Winter Soldier is really the first of the stand alone movies that takes advantage of the one universe to use characters.  Yet, the film never loses sight of the fact that this is a Steve Rogers story, as he deals with his disillusionment with the government of the modern day United States and the grayness of SHIELD’s operation.

We begin with a fantastic introduction of Sam Wilson (AnthonyMackie) as he and Steve bond and then we get an opening action scene aboard the ship is so bad ass that is establishes Captain America as a massive brute immediately.  Watching Cap dismantle that crew on the ship was so entertaining that one could watch that the entire time.

However, Marvel movies are never just about the action and always deal with character and we get tons of character development of Steve Rogers.  The scene with Steve and Peggy is heart breaking and can bring tears to your eyes.  Steve’s uncertainty of what he wants to do in this new world is a great use of the fish out of water trope.

We live in a crazy world that has Robert Redford in a comic book movie.  Anything can happen now.  Redford is fantastic as Alexander Pierce and brings a gravitas to the film.

Captain America: The Winter Soldier is one of the best films in the entire MCU and really started a trend of excellence that would run right through to today.