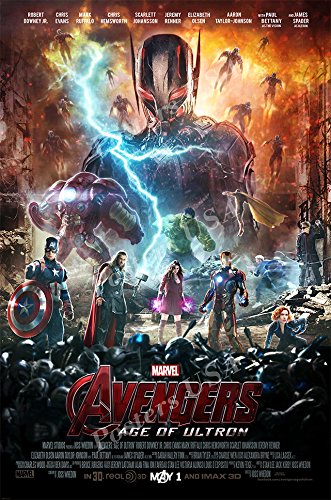 The EYG MCU Rewatch rolls on with the second official Avengers movie, Avengers: Age of Ultron.  Many people found this movie not up to the standards of the previous Avengers movie and some were disappointed with Ultron as a villain.  I do not fall into either of those camps.  Sure, I may like The Avengers better than Age of Ultron, but to say that there is a significant downgrade is incorrect.

I love James Spader. I was a fan of his from The Practice and Boston Legal, so when I heard he was cast as the voice of Ultron, I was giddy.  Spader’s voice was distinctive and creepy and worked very well for Ultron.  I can see where some people may not have been fond of the way the dialogue for Ultron was written, and I understand that point of view.  He is originally written as if he were Tony Stark, much like the comic version was much like Hank Pym (who created Ultron in the comics).  I would agree that the Stark banter did not fit as well for Ultron and could have been minimized.

I also thought Ultron was taken out too easily, although to say what we saw was easy is a bit of disservice.  I loved the fact that the Avengers were there saving people.  That is something that is. many times, ignored in the big final scene battles and seeing our heroes being heroic is great.

Wanda(Elizabeth Olson) and Pietro (Aaron Taylor-Johnson) were nice additions, but their accents were not good.  It is a shame that they had them speak as they do.  By Infinity War, Wanda’s accent is fully gone, and that is a good thing.

The Bruce Banner/Black Widow relationship was fine.  It came out of nowhere at the beginning and was difficult to believe at times, but it did not feel as forced as Banner and Betty Ross from The Incredible Hulk or Thor and Jane Foster from the Thor movies.

The party scenes at Stark Tower were some of the best of the movie.  Seeing each member of the Avengers give it a shot to pick up Mjolnir was awesome.  Seeing Thor’s face when Cap near moved the hammer a bit was perfect.

You can see the seeds for the future Civil War being planted among the team as the group of characters were constantly conflicted with one another.  Tony Stark, who could be considered the real villain of phase one through three of the MCU, is the antagonist behind every conflict it seemed.  Stark’s failures consistently fueled the character to try something else which blows up in his face, some times figuratively, some times literally.

The arrival of the Vision (Paul Bettany) is another standout moment of Age of Ultron.  They took the character who should have had all kinds of questions about his motives and found a way to immediately wash those away.

While I admit there are some messy bits in the film, Age of Ultron is another emotional journey for the Avengers and provides us with another breathless battle.