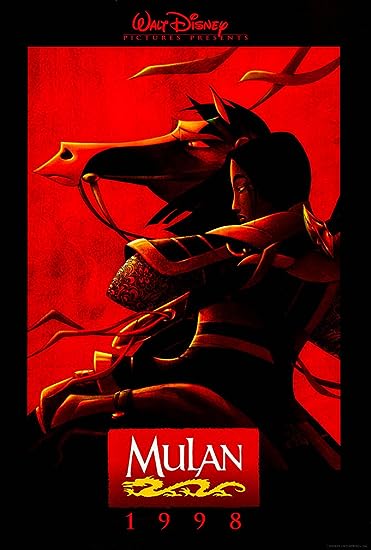 I had never seen Mulan.  When it was in theaters, I was not interested.  However, I know that there is a live action version coming from Disney soon, so I had put it on my list to see.

Plus, one of my favorite actresses, Ming-Na Wen, who I just love as Agent Melinda May on Marvel’s Agents of SHIELD, voiced Mulan in the animated version.  I did not originally know that.  Ming-Na Wen is being included in the 2019 Class of Disney Legends.  Congrats to Ming-Na Wen.

I found Mulan on Netflix today and I figured that I should watch it before Disney pulls the film from the streaming service to put on their own Disney Plus later this year.

Mulan is the story of a young girl who, in an attempt to save the life of her father, impersonates a man and trains as a Chinese warrior to help stop the marauding Huns.

We have seen this type of story before, but Mulan resonates today more than ever.  With the emergence of powerful female characters such as Wonder Woman and Captain Marvel, Mulan stands out as a leader of the female hero.

In fact, Mulan is the hero of this story from the beginning right through to the conclusion.  The third act really shows her ability to think her way through the problem and to put herself on the line for China.

There is a great voice cast to go along with Ming-Na Wen.  Eddie Murphy is Mushu, the talking dragon whose job was to be the guardian of Mulan and make sure that her family’s honor was not tarnished.  The late, great Miguel Ferrer played Shan-Yu, the villainous Hun looking to take over China, S.D. Wong voiced Shang, the newly appointed captain responsible for Mulan’s training. Harvey Feinstein is one of Mulan’s fellow soldiers named Yao (though this was a strange voice choice).  Pat Morita was the Chinese Emperor.  Donny Osmond and Lea Salonga were the singing voices for Mulan and Shang.

Of the songs, the only real memorable one to me was Donny Osmond’s I’ll Make a Man out of You, which takes place during the training montage.

The film goes very fast, and it does feel as if there is a scene or two that should have been included.  Perhaps another encounter with the Huns before the special snow fight.  Still, the flow of Mulan felt tight and maybe another scene would have messed with the timing.

It really was a great film with a great message.  It was long overdue to have seen the classic.