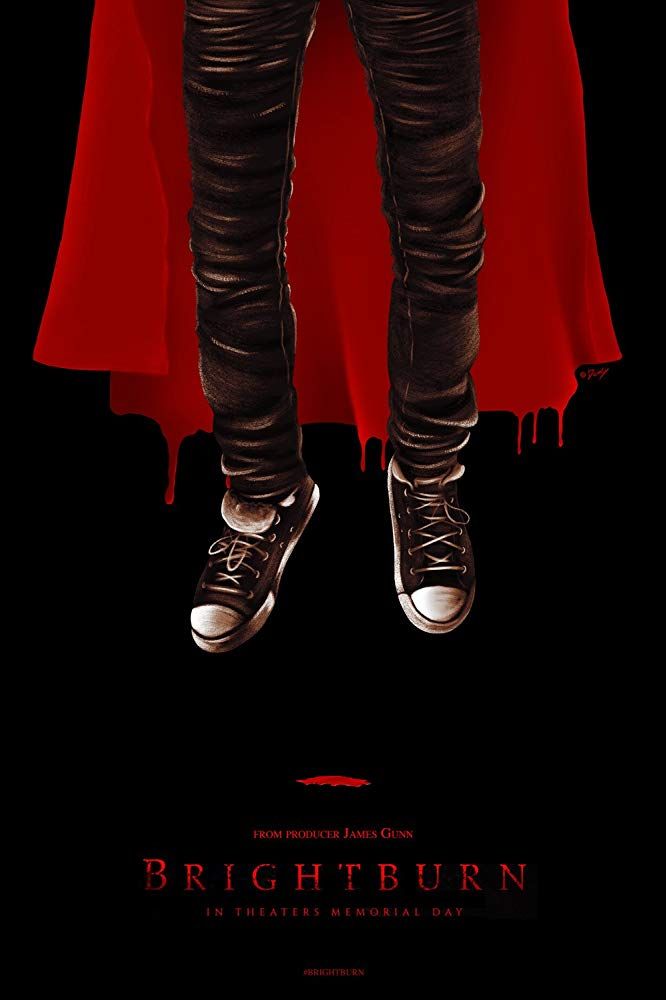 It is a simple premise.  What if Superman had turned evil when he was a child (shouldn’t use the term “What If” here).

DC Comics has investigated this type of Elseworlds type tale with the well received Red Son story, where baby Kal-El landed in Russia instead of Kansas, so this is not completely original of an idea.  However, there are some differences to Brightburn.

First off, this is not, technically, Superman.  Sure the mythos and origin are VERY similar, but the character’s name is not Clark Kent and he is not found by Jonathan and Martha Kent.  These are DC characters and are not owned by Sony, one of the distributors of this movie.  In fact, according to IMDB, the film is based more on a Marvel Comics series from the early 2000s called Supreme Power, a take-off of en evil Justice League.

In Brightburn, Tori (Elizabeth Banks) and Kyle (David Denman) Breyer were a happily married couple desperate to conceive their own child after a series of failures.  One night, a spaceship crashed outside their farmhouse in Brightburn, Kansas and their prayers had been answered.  Inside the spaceship was a healthy baby boy.  They adopt the baby and raise him as their own.

Things seem to be going fine for the little family until their son, Brandon (Jackson A. Dunn), begins being pulled by voices to the barn where the spaceship has been hidden.  The message being transmitted to Brandon is anything but positive and it changes the boy into a dangerous psychopath.

The film is fascinating in many ways though I wish it would have spent more time on character then it did.  The concept of how were these two parents, who had been so desperate to have their own child, would react when they realized that their son was not who/what they thought he was.  I think the film both touched on this, but did not go deep enough to make it worthwhile.

Still, the film becomes a tight thriller/horror film as Brandon gets more violent.  There are some scenes that are so graphic and gory that I had to turn away from the screen.  The gore was not overused though and it fit the moment each time it was used.  It is absolutely what would happen if someone like Superman attacked you.

Produced by James Gunn, you can feel the type of vibe from Brightburn that other non-MCU produced/directed/written films by Gunn have.  Brightburn is directed by David Yarovesky and written by Brian and Mark Gunn.  The promotional materials certainly lead you to believe that this is a Superman-like story but with a twist, and that is exactly what it is: a dark and violent take on the Superman story.

The performances of our three main actors, Elizabeth Banks, David Denman and Jackson A. Dunn, are all great and elevate the material to another level.  I especially enjoyed some of the subtle moments from young Jackson A. Dunn, who played several different emotions extremely well.  Elizabeth Banks is the standout as the mother who knows what is happening, but simply cannot accept it.  I do not think this is a case of a mother too dumb to see what is happening as much as it is a mother too desperate to admit what is right before her eyes.  That slight difference makes the character considerably more understandable.

There was one scene that I really disliked that involved Brandon and his father and a hunting trip near the third act that seemed to me came out of nowhere.  There were some other moments that I felt could have used some more development.  The film was only 91 minutes and might have benefited from another 20 minutes or so.

While I wanted some deeper scenes, what I got was thrilling and disturbing, full of gore and dramatic tension.  I found this a compelling Elseworlds entry and a return to form for James Gunn.