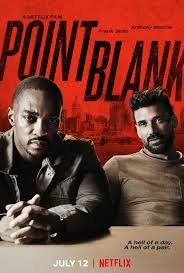 Looking over at Netflix this evening and I came across a film called Point Blank starring the Falcon and Crossbones.  That is, of course, Anthony Mackie and Frank Grillo, and it was a somewhat short film so I thought I would give it a chance.

So, Frank Grillo’s character, Abe, was being set up to take the fall for the assassination of the District Attorney and he winds up in the hospital when his brother Mateo (Christian Cooke) hits him with the car on their attempted escape from the scene of the crime.  Mateo kidnaps the nurse-on-duty, Paul’s (Anthony Mackie) pregnant wife Taryn (Teyonah Parris) to ensure the help of Paul to break Abe from custody.

Paul agrees to do whatever it takes to get his wife back; however, the story takes an unexpected turn when it looks as if the status quo is not what he expects.

I like both Anthony Mackie and Frank Grillo so I had hopes for this film.  The problem was this… the movie wants you to relate to and cheer for Abe and Mateo as the career criminals because they had hearts of gold and that they stumbled into the conspiracy of the film.  Yet, I could not find myself rooting for either one of these characters because Mateo kidnapped a pregnant woman and held her at gunpoint.  Both of them kept the woman in their custody despite the potential danger that they might have exposed the unborn child to.  I had a hard time getting past that.  Maybe the other people who were framing Abe for the D.A.’s murder were worse, but that does not make it better for me.  The only people in the film who you could root for was Paul and Taryn.  And truthfully, I was a little uncertain about Paul.

The third act of the movie stretched credibility beyond reasonable levels as Abe and Paul launch their attack to get their revenge and retrieve the now-in-labor Taryn, respectfully.

The tone was all over the place.  It would be moving along with a seriousness of the situation and then, suddenly, something funny, almost slapstick-like would happen, feeling completely out of place.

Anthony Mackie was fine here, as was Frank Grillo, but the story really betrayed them.