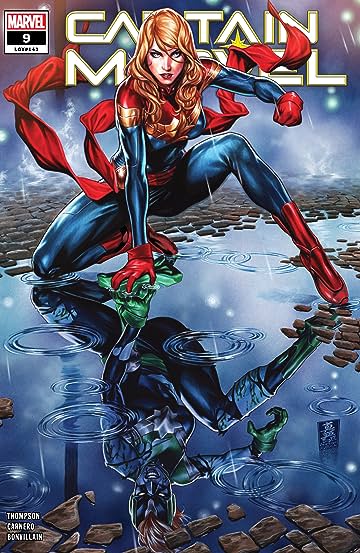 Captain Marvel has found a story that is intriguing.  Carol has been moving along through the multiple versions of her book for several years, and, while many of these issues have been fine, few of them have been stand out.

But when I arrived at my comic shop today, I saw Captain Marvel #9 listed atop the store’s Top 5 list of comics for the week.  I was shocked.  So I read the book, and I was very interested.

Seems that Carol Danvers has been having trouble with her powers.  And this mystery of what is happening is very compelling.  It seemed as if there was an obvious answer and Carol pursued that possibility only to discover that there is more than what she expected.

Tony Stark made an appearance in this issue too, showing strong Banter with Captain Marvel as well as Spider-Man (from Friendly Neighborhood Spider-Man #10).  There are also great scenes with Carol and Jessica Drew, aka Spider-Woman.  I loved their relationship over the past several years (especially in Jessica’s own book) and it is nice to see them reconnect.

There is a beautiful cover on this issue as well, from Mark Brooks.

The idea/theme of this story feels as if it is ripped out of the headlines as the country has started to see Captain Marvel as an alien, more Kree than earth hear.  Meanwhile, we are seeing the arrival of a new hero in the Marvel Universe, named Star.  We get a little more with her during this issue.  I suspect she is involved in the overall story, but I am excited to see where it takes me.

It is nice to see such a legacy character as Carol Danvers be placed in an engaging and entertaining story.  We can also relate to her since we all know what it feels like to be afraid that you are sick more than you know.

Hopefully this continues to improve each month.