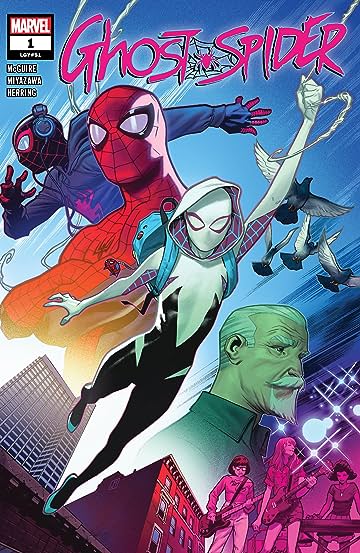 Gwen Stacy of Earth-65 has returned to the comic rack this week with the release of Ghost Spider#1.

Gwen Stacy’s secret identity has been revealed in her home dimension, and she is finding that to be a problem with her normal life.  So Gwen decided that she still wanted to attend college like any girl.  However, it turned out to be not quite like any girl.

She applied to Empire State University, on Earth-616.  Yes, that is the earth where Peter Parker lives.

Peter used his “contacts” at ESU to get Gwen accepted in the program.  Gwen’s plans, go to college in 6161 and fight crime in 65.

What could go wrong?

The first issue was a strong start, working Gwen through the set up of the dimensional traveling aspect of the story.  Peter Parker/Spidey guest starred here as well, helping round the Ghost Spider in the lore of 616 immediately.

However, the end of the story reached back to another story in Spider-history as a major villain makes an appearance in Earth-65.

Book started out fun and looks to be an interesting continuation of Gwen Stacy moving forward unlike any other superhero before her.