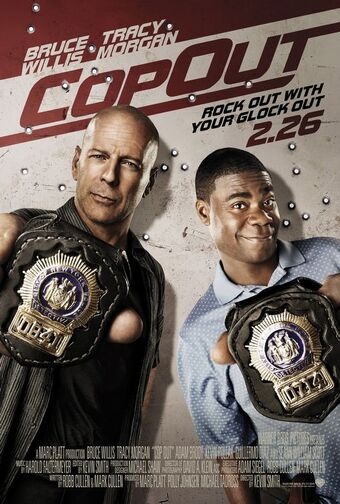 The fourth movie in the Punish-Myself-Binge was destined to be perceived by me differently simply because it followed my viewing of the horrid The Love Guru.  It couldn’t be worse, could it?

Cop Out was the notorious buddy cop movie directed by Kevin Smith and starring Bruce Willis and Tracy Morgan.  Cop Out received an 18% on Rotten Tomatoes and a pretty low 39% on the audience score.  Kevin Smith tells a story about how difficult it was for him to work with Bruce Willis.  Still, could it be worse than The Love Guru?

Well, by comparison to The Love Guru, Cop Out looks like The Godfather.  It’s not, of course.  It’s a bad movie, but after watching the travesty that was the Mike Myers’ mess, anything would have looked better.  In fact, Cop Out was probably the best of the four movies that I have looked at so far today.

That is not saying that I would consider this that elusive “guilty pleasure” that I started this binge looking for because it was not.  Still, there were some parts that were fine.

Cop Out was predictable and featured just about every last buddy cop trope imaginable.  Tracy Morgan was just too loud all the time (although there was a cute scene in an interrogation room where Morgan was quoting movies).

The story was simple and yet way too messy.  The main villain, named Poh Boy, was desperately distracting because I recognized him but could not place the face.  It bothered me for the first half of the movie until I broke down and pulled out IMDB for a search.  As soon as I saw a more recent picture of the actor playing Poh Boy, which was Guillermo Diaz, I recognized him as Huck from Scandal.  That was a relief.

This could have easily have been a Bad Boys movie without breaking a sweat.  Kevin Hart could take the role played by Tracy Morgan and make it his own.  There was absolutely nothing special or different about this movie, which is usually not what you see in a Kevin Smith movie.  Of course, this was a big studio film that helped convince Smith to basically do his own films from then on.

Cop Out fell into a good space in my viewing schedule because I did like it more than Twilight, The Love Guru and The Last Airbender, but it will never be confused with a good movie.