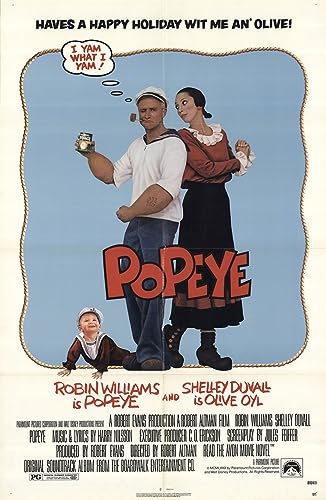 What in the blue hell did I just watch?

I watched the 1980 film Popeye, starring Robin Williams and Shelley Duvall, and I cannot decide if what I saw was a masterpiece or a total and complete mess.  Perhaps it’s both.

Just recently, Popeye longtime animator Gene Deitch passed away at age 95 and, when I saw the film on Netflix, it got me thinking about the movie.  I had never seen it, but I had heard some just terrible word of mouth about it.  Even Robin Williams had made fun of the movie.

However, I love Robin Williams, and I had heard recently some positives of the film from film critic William Bibbiani.  I had placed it on my queue on Netflix on the weekend that I had decided to do the Punish-Myself-Binge, but I did not get to it as the first four I watched that weekend ruined that concept for me.

Finally I decided this morning would be a good time to watch it.

Okay, first of all, the casting of this movie was spot on.  As great as Robin Williams was as Popeye, I do not think I have ever seen a more inspired bit of casting than Shelley Duvall, the same year that she played Wendy Torrence in the Shining.  Duvall’s performance was as if the oddball character of Olive Oyl had leaped out of the comic strip and onto the big screen.  Paul L. Smith was a perfect Bluto.  Ray Walston, a personal favorite from Picket Fences and Eerie, Indiana, appeared as Poopdeck Pappy.  Classic character actor Paul Dooley was Wimpy.

I am watching the movie, trying to hear the constant mumbling by just about all of the characters, and then they started to sing and I thought, “Is Popeye a musical?”  Honestly, I am still not sure.  The songs were bizarre and different than I had ever heard in a musical.  That is not a bad thing, but I struggled in my head to classify it.  Perhaps the idea is that Popeye is meant to defy expectations.

The story is pretty much a group of scenes strung together to show the characters as a live-action cartoon.  We have Popeye arrive in Sweethaven searching for his pappy, meet Olive Oyl and her eccentric family (her father and his constant desire for an apology is a funny running gag), fight an unbeatable boxer, find Swee’pea, and fall for Olive.

The plot actually kicks into gear in the third act when Swee’pea is kidnapped by Bluto, because the baby has some future predicting skills and Bluto wants him to find the mysterious hidden treasure.  The entire cast of characters chase after Bluto and end up on an island with a giant octopus.

Director Robert Altman created a live-action cartoon that is certainly unlike anything I have ever seen before.  As a movie, I am not sure that it is any good, but as a piece of weird and strange entertainment, Popeye succeeds.  Musical?  Maybe not.  There are songs… sort of.  The village of Sweethaven is a masterwork in construction and the people that populates the village create a world that felt lived in and, about as real as could be.

I can certainly understand why people hate this movie because it is one of the weirdest experiences I have had watching a film in a long time.  That is not a negative.