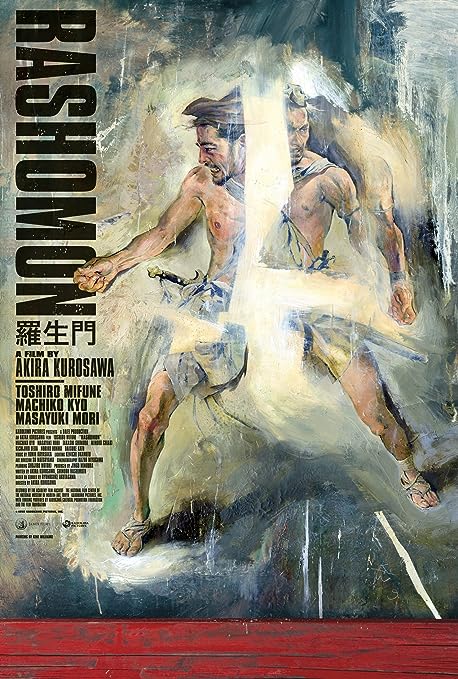 EYG Hall of Famer Akira Kurosawa had directed many classic international films during his life, but many believe that his greatest work is the black and white film Rashomon, which I watched today.

This movie inspired the storytelling technique called the Rashomon Effect, which is the style of telling the same event in a contradictory manner through the POV of different characters, having them adjust the events to benefit themselves.  It is a technique that I have seen many times, but I hadn’t been aware of until this movie crossed my path.

I was able to see an English subtitled version on Amazon Prime.  As in all of the subtitled movies, after awhile, it feels as if I am no longer reading the subtitles and they are just happening.  It is a very interesting effect that I have seen and it has changed my tune on the subtitled movies.  At one time, I did not want to “read” a movie, but now, it does not bother me at all.  In fact, I was 100% prefer that over dubbing voices over top of the film.

Anyway, in Rashomon, three men congregate under shelter in a rainstorm at the Rashomon city gate to stay dry.  While there, they exchange eye witness accounts about a crime that had just happened. The infamous bandit Tajômaru (Toshiro Mifune) came across a marred couple and he becomes enamored with the wife, Masako (Machiko Kyô).  Tajômaru chased after them and captured her husband, Takehiro (Masayuki Mori).  After raping the woman, her husband wound up dead.  This is where the contradiction comes into play.

Fascinatingly enough, the film never really reveals what the actual events were.  There were four versions, and it may seem that the fourth version is the one that is the truthful one, but there is enough questions raised to bring uncertainty to the film.  According to the details on Amazon Prime, even the actors in the film had approached Kurosawa, to find out what the answers were, and he would not tell them.  He said the film was meant to explore the multiple realities.

The film showed the nature of eye witnesses and how unreliable they may be.  You can never tell what might color the perception of an eye witnesses story.  In Rashomon, even the story that seems as if it should have been the most unbiased brings questions as to the viability of the tale.

The film is shot beautifully, with the black and white creating such a rich and textured backdrop for this story of betrayal and struggle for power and honor.  There are many examples of symbolism throughout the film, the entire story itself an analogy for the perception of man.

The acting was tremendous and, once again, shows me that I do not want English translation dubbed over top.  The voices, speaking in Japanese, is required to feel the connotation and the emotion within it.  You do not have to understand Japanese to understand the feelings of those involved.  The actors do an amazing job.

Rashomon truly was an experience that I was glad to have undertook.  It is a beautiful looking story of the depth of man and the ways each person can adjust a story to make it fit their world view.  It was truly a masterpiece.