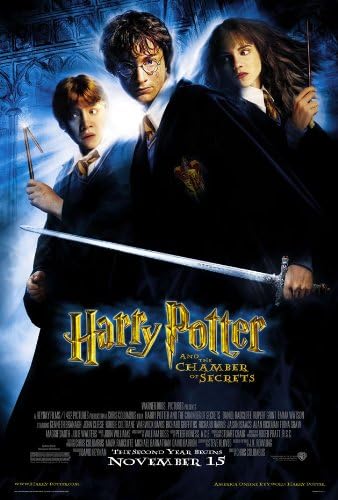 Day 2 of the EYG 8 Days of Potter has brought us the second film in the Harry Potter franchise with Harry Potter and the Chamber of Secrets.

Harry (Daniel Radcliffe) returns to Hogwarts to another mystery.  This time, there are mysterious attacks on students as the mythical Chamber of Secrets had apparently been opened.  Harry, Ron (Rupert Grint) and Hermione (Emma Watson) are attempting to solve the mystery before the danger costs them everything.

Chamber of Secrets is a solid film and I enjoyed the third act very much with Harry in the Chamber.  You can see improvements among the young actors in their performances from Sorcerer’s Stone.  There are some points in the film that are quite cheesy and is a negative to the film.  There are several points (the spiders, Hermione as a cat, the anagram, pixies etc) that I would have eliminated because they dragged the story.

Chamber of Secrets is very similar to the concepts of Sorcerer’s Stone.  It is a mysterious location within the school.  Harry, Ron and Hermione think the culprit is one of the “bad” guys (Stone= Snape, Chamber=Malfoy).  Harry sneaks around under the invisibility cloak.  Harry winds up in danger in the woods.  They discover the secret pathway.  They go down under the school.  Harry gets separated from his friends and heads on alone.  The villain is someone we do not expect.  Voldemort is trying to get his body back.  I am sure there are more as I was noticing these repetitions more this time through than I had before.

There are areas that are better than the original. There is considerably less exposition here.  We don’t need to just have so many people explaining stuff to us, which helps with the narrative.  The film is funnier and has much more action.  They are able to get into the actual main story much quicker this time and that helped with the pace of the film.  It is a long movie, but you do not feel its length because the pace is so well laid out.

The mystery is compelling and the story is nicely weaved together.  While the conclusion of what is going on may be a tad underwhelming and repetitive, the final confrontation with Harry and the Basilisk is an utter joy.

The tone of the film does stray into a little darker of territory with the introduction of Lucius Malfoy (Jason Isaacs).  The Harry Potter franchise one that really goes darker the older these students get and as the story progresses.

I disliked Dobby (Toby Jones) a great deal for most of this movie.  The very end sequence with Dobby, Harry and Lucius is fire and shows you some amazing traits of the character of Harry Potter, but the early uses of Dobby were extremely dumb and felt like used simply for comedic effect.  I had terrible flashbacks to Jar Jar Binks watching Dobby.

Overall, I think the Chamber of Secrets takes the same basic formula as the Sorcerer’s Stone and improves upon it.  There are some really good moments in the film that overcome the weaknesses.  This is the final film in the franchise directed by Chris Columbus as Alfonso Cuarón takes over for the next installment.