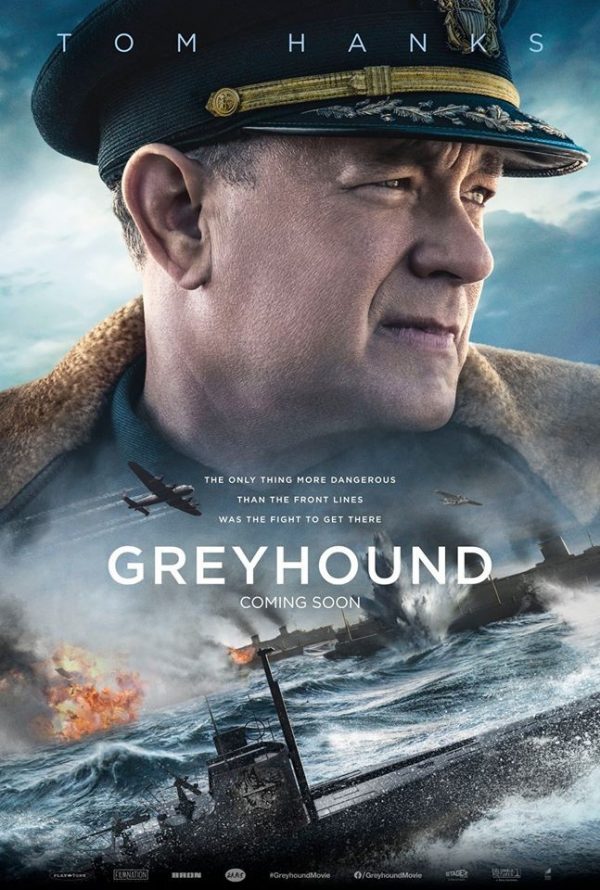 I subscribed to the free 7-day trial of Apple TV + is weekend, specifically, for one reason.  I found out that the new Tom Hanks World War II film from Sony Pictures, Greyhound, had been purchased by Apple TV + and would debut on the streaming service.  What better way to check out a free trial than for a Tom Hanks film.

Hanks expressed some disappointment that the film was not receiving a theatrical release and I can understand why.  The film would certainly have more of an epic feel on the big screen than it does on the TV screens.  Although, I did not find that it subtracted from the viewing experience, I could understand how it might add to it.

Greyhound tells the true story of the Battle of the Atlantic, considered to be one of the longest and most complex naval battles in history.  In the early days of America’s involvement in WWII, the inexperienced Commander Ernest Krause (Tom Hanks) led an international convoy of Allied ships across the Northern Atlantic while being pursued by a wolfpack of German u-boats.

Greyhound is a sparse 90-minutes in run time, which tends to be the opposite of typical World War II films.  With that run time, the pacing of the film is exceptional.  There is so much that happens in the time that you scarcely have time to take a breath.  Greyhound effectively uses their time to tell the story.

However, one of the drawbacks to this type of storytelling is that, with the exclusion of Commander Krause, there are very few characters that are more than faces on the screen.  Tom Hanks has the most development, but most everyone else is simply there to follow orders.  Even a scene during a burial at sea seemed less emotional than it should have been because the victims were not people that we had a connection with, outside of the fact that they were on this ship.

Still, the look of this film is amazing, with beautiful scenes upon the water and dramatic recreations of the dogfights going down between the Greyhound and the u-boats.  Cinematically, Greyhound is a marvel.

If you are a fan of war movies, Greyhound is an effective story that is a quick and enjoyable watch.  Tom Hanks is great as always and the visuals are stunning.

One thought on “Greyhound”