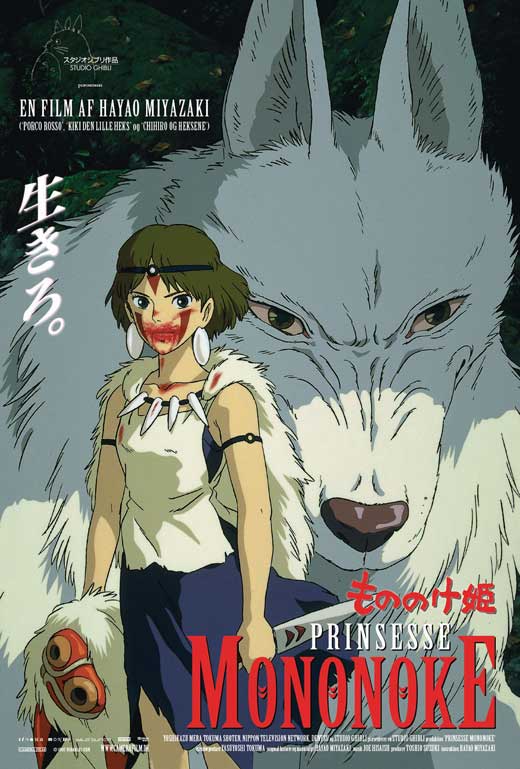 Hayao Miyazaki returns to head up the next Studio Ghibli film and this is one of the studio’s most popular and well-known films.  Princess Mononoke is one of the first films people cite when speaking about the animation giant and it is well deserved.  The film is truly a grandiose, fantasy epic that spirals through the forests of Japan.

A small village in Japan is attacked by a demon boar.  The village’s last prince, Ashitaka, killed it, but, in the processes, was cursed by the creature.  The curse covered Ashitaka’s arm and threatened to creep across his whole body and kill him from within.

The young hero set off from his village in the hopes of finding aid from the Great Forest Spirit.  On his quest, he comes across a settlement called Irontown, led by Lady Eboshi, who was responsible for causing the boar to become a demon.

During his struggles, Ashitaka encountered the Wolf god Moro, and her adopted human daughter San.

Princess Mononoke is an amazing story filled with drama, tension and heroic actions.  Ashitaka and San are both positive and powerful models of heroism, whether or not they were on the same side.  Ashitaka’s message of trying to convince the humans and the forest to live in peace placed him in the center of the struggles of all of the forces, and he bravely did what he could to make it happen.

One of my favorite parts of this film was the fact that there was no one portrayed as evil.  These were deep and three dimensional characters who had clear and understandable motives for why they were acting as they were.  In fact, even the film’s main antagonist, Lady Eboshi, could not be considered a villain.  She committed many acts that could be considered wrong, but you understood her reasons and thus made her more human.  Just about all of the characters in the film that could be considered the “bad guys” have motivation that you can buy.  The only group that is not truly given a deeper meaning is the samurais.

Have I mentioned before how much I love the animation and the imagery used in these Studio Ghibli films?  Princess Mononoke is not an exception.  It is beautifully rendered and provide a stunning visual experience.

The only criticism I may have its that the movie is quite long for an animated movie, but it does flow well and, perhaps, the length is just one more way that Princess Mononoke breaks the expectations of animated movies.  It is an epic for sure and should be viewed as one.