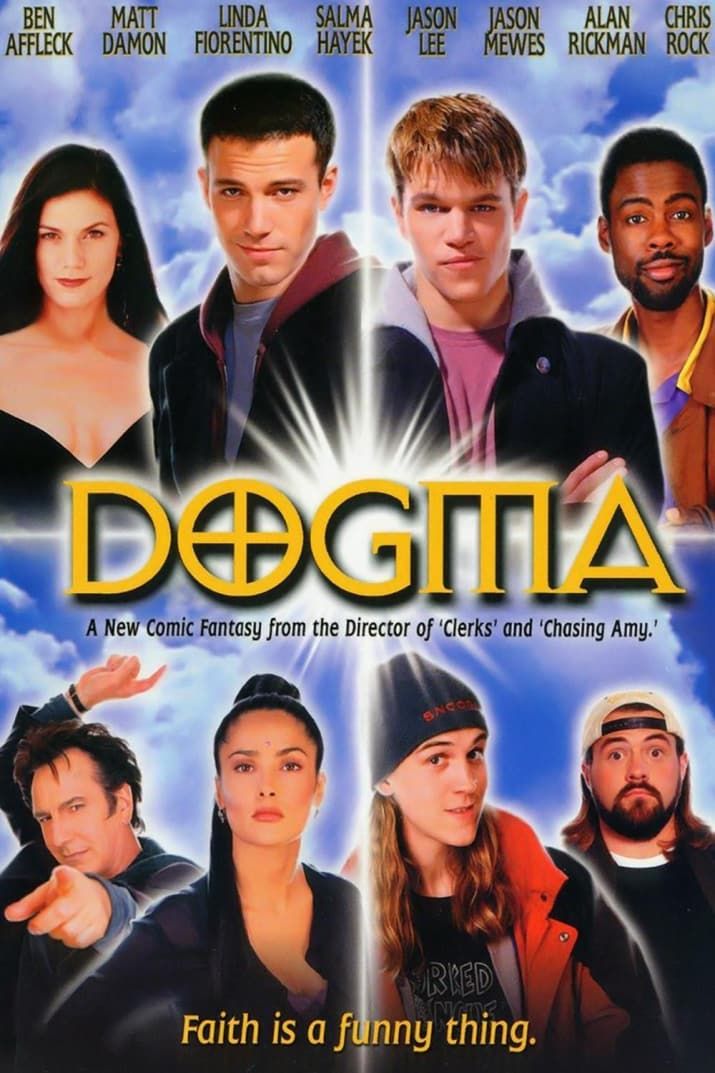 The final film for today in the Memorial Day Movie Binge Watch is my favorite of director Kevin Smith’s filmography, Dogma.

There was a lot of protesting against this film because of its special take on religion, but I think that is just silly.  There is nothing here that should cause anyone to question their faith or that could be considered blasphemous.  In fact, the film is steeped in religion and religious lore that should be appreciated for what it is.

Bartleby (Ben Affleck) and Loki (Matt Damon) are angels that have been permanently banned from Heaven. However, a church in New Jersey has started a “rebranding” of sorts and they have offered the chance for any sinner to pass through the archways of their church and be forgiven… to have a clean slate.  This would allow Bartleby and Loki the chance to re-enter Heaven and prove God wrong and thus undo all of existence.

Kevin Smith grew up Catholic so he was able to weave plenty of Catholic dogma into the film that included some things that perhaps few people have heard of.  For example, Metatron (Alan Rickman) as the Voice of God, an archangel that is really a thing.

There is way more depth than some of Smith’s work and, although there is still the foul mouthed Jay and the super quiet Silent Bob, most of these characters are understandable and still relatable.  Bethany (Linda Fiorentino) has a remarkable arc for her character, going from an abortion clinic worker to someone recruited by God to save the day.

In fact, one of my favorite scenes was on the train when Bethany and Bartleby were drinking together and sharing experiences about how they lost faith in God.  It was such a real conversation that you forget that one of them is an angel and the other one is meant to kill the angel.  Both Fiorentino and Affleck do some of their best work in this scene.

It is amazing to see Alan Rickman again.  He is truly missed.  Every scene that he is in is raised to a new level.  You can see the others in the scene working on raising their game as well.  It is just something that an actor of Rickman’s quality does.

The story is wonderfully laid out as the characters work their way to this church in New Jersey.  We meet other religious figures such as The Muse Serendipity (Selma Hayek), the 13th Apostle Rufus (Chris Rock), and the demon Azrael (Jason Lee).  George Carlin has a small, but pivotal role of Cardinal Glick who introduces the world to the Buddy Christ, one of the best jokes in the whole film.

Those of you who object to this film on religious reasons should listen to the quote from Alan Rickman about God, “I told you she was funny.”  There is no way that God is not laughing at all of this.

There are great relationships throughout, including Bethany and Rufus, Bethany and Metatron, Loki and Bartleby, Rufus and Serendipity, Jay and Silent Bob and each one brings something special to the film.

There is so much greatness in Dogma. Dogma is filled with pop culture references that really entertain.   It is a fantastic ride from start to finish, without any letdown at all.