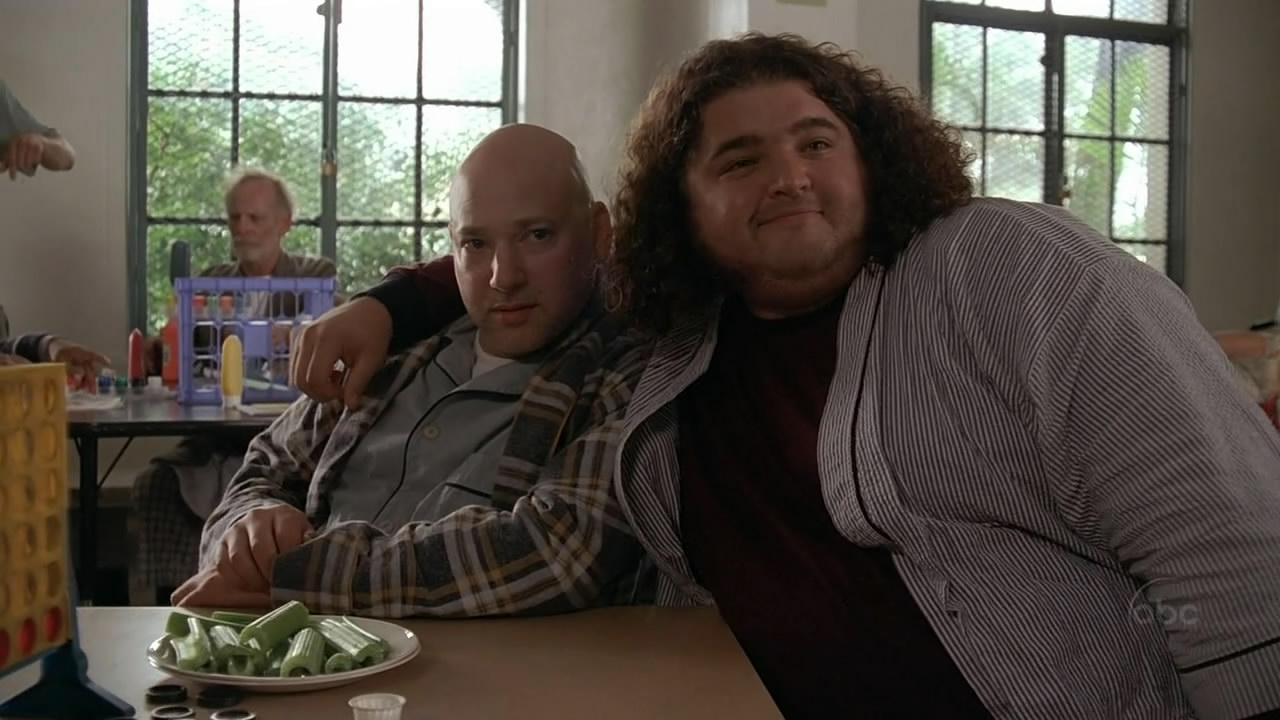 “Dave” is a Hurley-centric episode that takes and explores the possibility that one of the prevailing fan theories of the time, specifically being that everything on the Island is inside someone’s head.  They decided to use Hugo Reyes for this example, since he was already known to have been in a mental institution.

Hurley, trying to stop eating, is encouraged by Libby to throw away his stash of food.  Minutes after he does so, the survivors discover the food drop that had happened when Locke was trapped in the Swan during “Lockdown.”  The irony is palpable.

Then, Hurley sees his friend Dave from the mental institution, still dressed in his bathrobe and slippers, but now on the Island.  Hurley chased after Dave, who disappeared.

Hurley began to question himself and he went to Sawyer for medication.  When Sawyer taunted Hurley about the situation, Hurley flipped, attacked Sawyer and started yelling the nicknames that Sawyer had given to Hurley back at Sawyer.  It is actually a very funny scene, especially with Jin in the background snickering as Hurley was pounding on Sawyer.

Hurley wound up leaving the beach to get away from people and ran into Dave who dropped the info that Hugo was actually still in his coma at the institution and all of the events of the Island were just in his head.

When Dave explained it, it sounded plausible and Hugo was starting to believe it.  Dave took Hugo to a large cliff and was trying to encourage him into jumping off, saying that if he jumped off, he would awaken from the coma.  To show this, Dave jumped himself.

Luckily for Hurley, Libby showed up in time and convinced Hurley that it was not all in his head.  She asked hi what the name was of the man with the broken leg, whom she had to bury on the other side of the Island.  Hurley’s biggest argument was that in real life, a girl like Libby does not like a guy like Hurley.  Libby responded by kissing Hurley.

In the flashbacks, we found out that Dave was actually just in Hurley’s imagination.  It was the side of Hurley that did not want him to stop eating.  Hurley was catatonic, according to his doctor, Dr. Brooks.  Apparently, there was an accident where 23 people were hurt or killed on a deck after it crashed when Hurley walked out on it.  The guilt over the accident really messed with Hurley.

Oh, and the end shot showed that Libby was also in the same mental institution as Hurley was…which was where Hurley “recognized’ her from.

Meanwhile at the Hatch, Henry is strung up and being questioned by Sayid and Ana Lucia.  Sayid continues to be angry and Ana Lucia prevented him from shooting Henry in the head.  Henry continued to try to lie to Sayid, but every time he did, Sayid had the truth at his fingertips.

Locke (now on crutches with a stress fracture in his leg) continues to be played by Henry.  This time, Henry said he never input the numbers into the computer and it just reset itself anyway.  Again, we know this to be a lie as we know what happens when the button is not pressed.  Henry really is playing with Locke’s faith in the Island, tempting him away from the light.