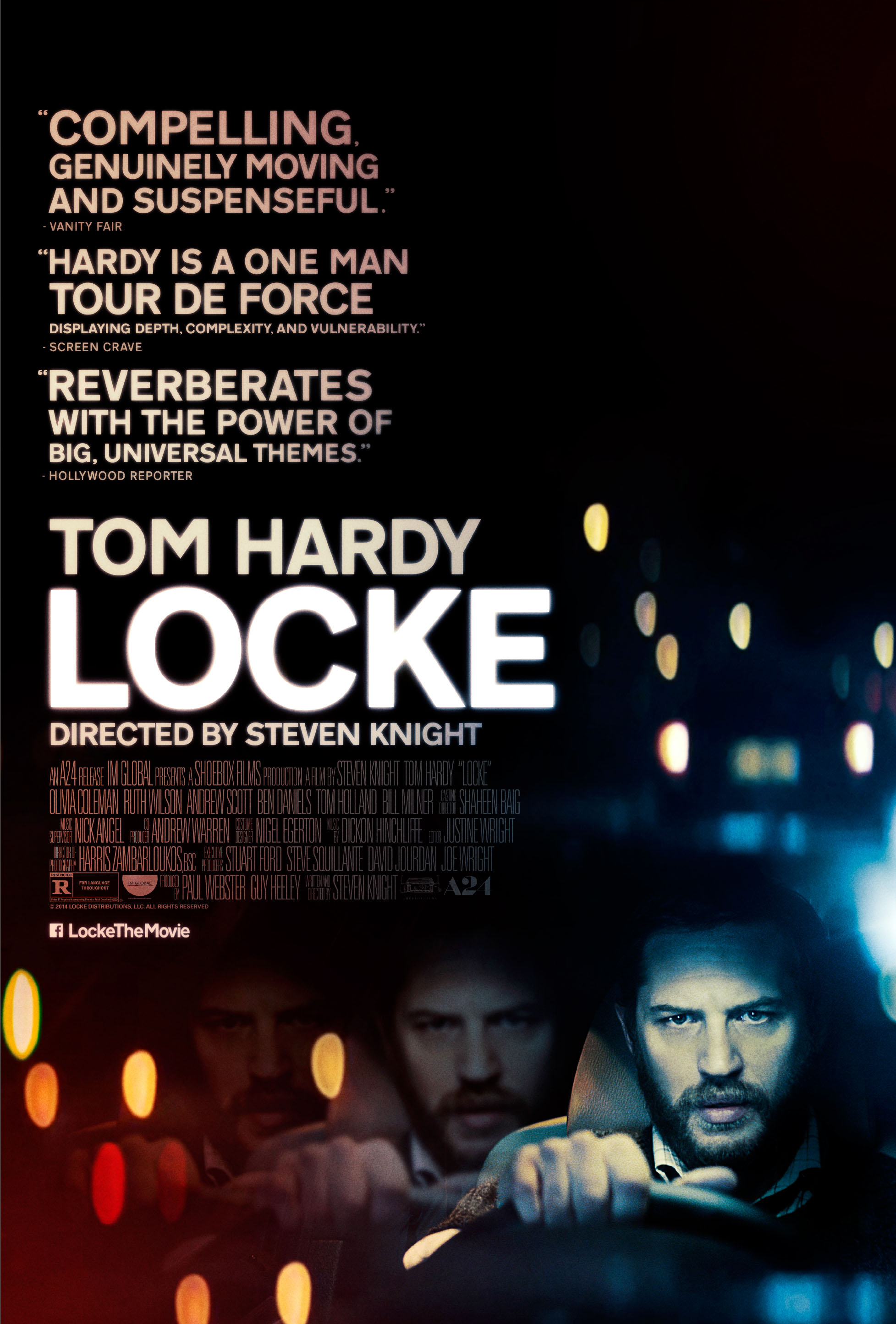 I was watching Collider Movie Talk at some point this week and someone mentioned a movie with Tom Hardy called Locke.  They were making the point that Tom Hardy was a great actor and that the trailer for the upcoming Venom trailer may not be the worst film ever because Hardy is a strong performer and, to prove it, in Locke, he was able to carry the film on his own inside a car.  It was an interesting discussion and so I went on my business.

Then tonight I was looking at Netflix and I came across the movie Locke.  It was one of those that I would not have paid much attention to unless I had heard that discussion on Movie Talk, so I pulled it up and watched it.

Locke was a fabulous film.

Tom Hardy played Ivan Locke, a happy family man and a construction manager preparing for the biggest project of his career.  However, one night, his life was thrown into chaos when he received a specific call.  A woman with whom he had a one-night-stand and had become pregnant had gone into premature labor and she was at the hospital an hour and a half away.

Locke, who had issues with an abusive/deadbeat dad growing up, was not going to make this child feel the same way he felt, so he got in his car and left his work site and started driving to the hospital.

Unfortunately, that meant that he was going to have to take care of the problems -at work, confessing his affair to his wife, with his work associate who was too much into the drink, and with the company he worked for, over the phone as he drove.

Tom Hardy spent the entire film on screen, driving his car and talking on the phone and it was riveting.  Each time the phone rang, some new horror was dropped in his lap.  His wife Katrina (Ruth Wilson) was shocked and betrayed by his confession and was not sure what to do.  His employee Donal (Andrew Scott) was thrust into more responsibility than he was used to in order to get the cement poured in the morning.  His sons, confused by the evening’s events and why their mom was crying, wanted to be watching the football game with their dad and tried to ignore what they could see happening around them.  The lonely and sad woman (Olivia Colman) who was giving birth kept calling with worries and concerns, especially after they discovered the umbilical cord was wrapped around the baby’s neck.

Tom Hardy was tremendous throughout each phone call, trying desperately to stay in control and to manage every situation that appeared to him.  He could tell things were slipping away, but he stubbornly clung to the hope that he could fix things.  He also carried a monologue along inside the car with the memory of his dead father, whom he had serious anger directed towards.

Then, one of his sons had called him to tell him about the football game and as I was listening to this voice, I thought to myself, that sounds like Tom Holland.  Sure enough, in the credits, Tom Holland was listed as playing his son, Eddie.  You could see that Locke loved his children but he just could not explain to them how this happened despite their increasing knowledge that something was terribly wrong.

Add to that the fact that he had been fired by the company from Chicago, Locke had plenty of reasons to give up.  However, he was still as dedicated to seeing the job, that he had walked out on prior to a huge cement pour, get finished.

It is quite a risk putting just one actor on screen the entire time, but Tom Hardy gave probably the best performance I have seen him give as he literally and figuratively drives this movie along.  His dialogue and facial expressions were spot on and really carried the mood.  He showed the strength of this man who was slowly losing everything that had mattered to him.

I must say that the ending was a little up in the air, but I understand that you weren’t able to wrap everything up in a film like this in the 82 minute car ride.  Tom Hardy controlled each moment in the car and brought a wonderful character study together.  This was more than just a gimmick film.  It was truly well done.