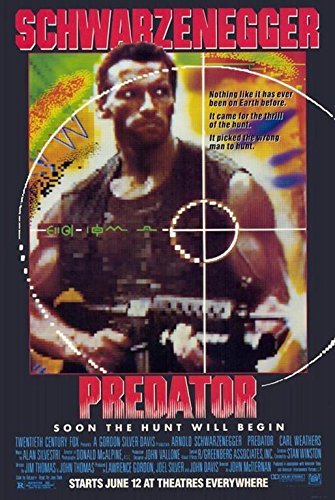 This one is so much better than the new version that came out this weekend, The Predator.  It is not even close.

This movie really shot Arnold Schwarzenegger into the stratosphere of movie stars with his great performance as Dutch, the leader of an elite crew of mercenaries/soldiers who are sent into Central America on a secret mission.

While taking care of the mission, Dutch and his team encounter an alien being that starts hunting them and killing them off one at a time.

Why this works so much better than the new film? There are many reasons.  One, in Predator, we took some time to know who this group of soldiers were and how they were connected to one another.  They were more than just a bunch of traits.  They were characters.  They may not have been incredibly deep, but they gave you a reason to care about their imminent deaths.  Two, the humor was kept to a bare minimum in the original.  There were several one liners in the first Predator that worked (most of Jesse Ventura’s lines for example), but the entire crew did not feel the need to be cracking wise through the whole movie.  Three. the Predator itself was more than just a Hulk rip-off.  This predator was a real hunter and he took advantage of his skills and his knowledge to become a threat.  He was not just show up and batter people to death like in the new film.  Fourth, the story was simple.  It was a slasher movie with soldiers instead of teenagers.  There was no need for complex convoluted plotlines that some times did not go anywhere.  There was one major plot…to survive.

Predator had some serious violence.  I know that my friends in our Champions group of role-playing games always wanted one of Blain’s (Jesse Ventura) line guns after seeing the chaos that thing brought.  The scene of the soldiers just decimating the jungle after Blain’s untimely death (really, he died way too soon!!!) was just amazing.

I also loved how Arnold Schwarzenegger was battered and bloody and nearly died.  He did not stroll through the film like nothing would ever hurt him.  He was frightened by this monster and he had to use every trick in the book to survive and he knew that he was lucky.

After watching this week’s Honest Trailers which featured this original Predator, I have to agree with them that the scene at the very beginning revealing that the Predator came from outer space was an unnecessary scene that actually hurt the film.  How much cooler would it have been if we did not know what it was that was stalking these men and causing such violence?  Instead, we know immediately that it was an alien.  I have to agree with Honest Trailers here, even though it was not a major problem.

If you want to see a Predator movie this weekend, I highly recommend that you skip the one with the “The” in front of it and watch the first and best  one, Predator.