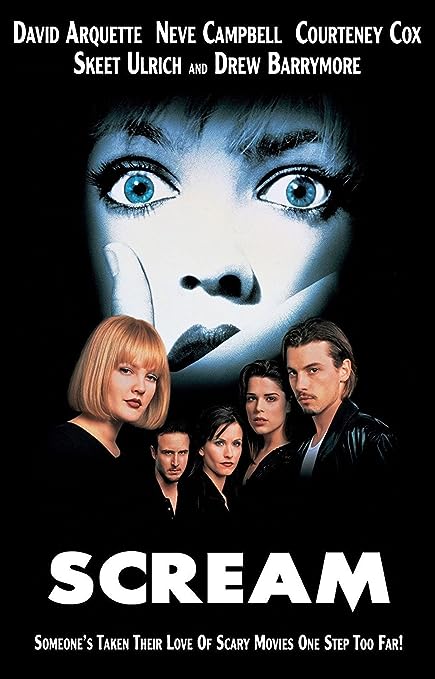 The month of October Fear Fest continues here at EYG with our look at horror classics in the “Doc’s Classic Movies Reviewed” section.  We started last week with Invasion of the Body Snatchers and this week, we start today and tomorrow’s horror binge-a-thon with Wes Craven’s beloved horror movie satire, Scream.

While it is a satire of horror movies, Scream also is a great example of how successful a slasher film can be.  Not only does the film subvert the genre, taking the “rules” and playing with them in many unexpected ways, but it also resets the rules for future films.

Starring Courteney Cox, who was in the middle of her huge success with Friends, Cox’s soon to be husband David Arquette, Neve Campbell who is everyone’s favorite non-victim, and Billy Loomis himself, Skeet Ulrich.

The use of dialogue involving other scary movies into Scream is a stroke of genius and really created a meta film that was also not-mega at all.  The back story with Sidney’s mother works wonderfully, even without anything first hand for us to see.  Connecting Courteney Cox’s reporter character to Sidney’s mom’s story was great.

Gail and Dep. Dewey were a fun couple too, mirroring the real life pairing between actors.

The use of a star with the stature of Drew Barrymore as the first victim of Ghostface was surprising for certain.  I remember being shocked when she died when I first saw this film years ago.  You just do not do such a thing.  I mean, there is Drew’s face front and center on the movie poster and, yet, she is the, well…technically, second victim to die (Ah, poor Steve…we hardly knew ye!).

Ghostface was anything but a perfect killing machine as he flailed and was battered through the movie as well. Having there be two Ghostfaces in the end is a twist that really kept people guessing.  It was a great film that set off a very successful slasher franchise, which is kind of ironic.