I am back this week.  Last week, the Top 10 Show’s category was Top 10 Stan Lee Cameos, which I had done the day of Stan Lee’s death.  Then the Wednesday classic episode featured Phillip Seymour Hoffman, who I like as an actor, but, for which, I could not realistically formulate a top 10 list.

So this week, with a real lack of films opening, I was wondering what their category would be.  And it turned out that, in honor of the Netflix film The Christmas Chronicles (which I haven’t seen yet), they decided to do the Top 10 Kurt Russell movies.

Now, this wasn’t a total slam dunk either.  I mean, I made it up to nine pretty easily, but I had a difficult time finding number ten.  I was either going to have to stretch a bit or fill it with one that I hadn’t seen or wasn’t that much of a fan of.  I chose the latter.

#10.  Big Trouble in Little China.  I know this one is a beloved film, but I have only seen it once, in the theaters, and I did not love it.  Now, I know that most people pile love on this film, and perhaps I should revisit it as a way to see if my opinion changed over the years.  I did not HATE hate it when I saw it in 1986, but I remember thinking that it was just too dumb.  Maybe that was the idea, though.

#9.  Furious 7.  Sure, this is not really Kurt Russell’s film, but he is in it and he plays a big role so I am counting it.  This is one of the better of the Fast franchise, mainly because of the loss of Paul Walker.  But the introduction of Mr. Nobody was one of my personal favorite parts of the film.

#8.  Vanilla Sky.  Yes, this is probably another cheat, since it is truly a Tom Cruise movie, but I was really trying to stretch this list out to ten.  Dr. Curtis McCabe is the psychologist that Tom Cruise’s character speaks to after coming out of prison and becomes an important part in his story.  Russell gives a strong supporting performance here and plays well with Cruise.

#7.  Backdraft.  Another one I have not seen lately, but that I remember liking when I saw it originally.  The Ron Howard directed thriller has some extremely dramatic scenes for Russell and his co-star William Baldwin.  The end of the movie is a bit of a stain on what came before, but it does not hamper the overall quality of the film.

#6.  Sky High.  Here’s one that is totally silly and full of cheese.  And I love it.  Kurt Russell is a super hero named The Commander and he is married to another super hero named Jetstream. They are two famous heroes, and their son, William, is not sure if he has any super powers at all.  He still attends Sky High in an attempt to live up to the legacy before him.  This is a wonderful hero’s journey for Will and Kurt Russell eats up the scenery.

#5.  The Hateful Eight.  Quentin Tarantino’s most recent Western featuring a fantastic cast that includes Russell.  John “The Hangman” Ruth is a bounty hunter who has captured his most recent bounty and he will not be giving it up under any circumstances.  The film is really good as our characters, including Sam L. Jackson as another bounty hunter, work their way through a blizzard, but the movie takes a huge turn upward when they arrive at the stagecoach stopover and the group begin their violent and Tarantino-like gory interactions.  I think The Hateful Eight was underrated as a movie and deserves its spot high on this list.

#4.  Miracle.  I agree with John Rocha.  I love the Disney movie version of the Miracle on Ice from the 1980 Winter Olympics.  Playing Olympic Hockey coach Herb Brooks, Kurt Russell helped tell this story of one of the most monumental upsets in the history of sports.  The defeat of the USSR Hockey team by the American team was improbable and miraculous.  “Do you believe in miracles?  Yes!!!” And I believe in this film.

#3.  Deepwater Horizon.  This is a movie that I absolutely loved and I wished more people saw.  It was so good that the public’s dismissal of it is a crime.  This is another supporting performance from Russell ( as the main protagonist is Mark Wahlberg’s character), but Russell really brought it as the general operational supervisor, Jimmy Harrell.  And he is really rocking that mustache. 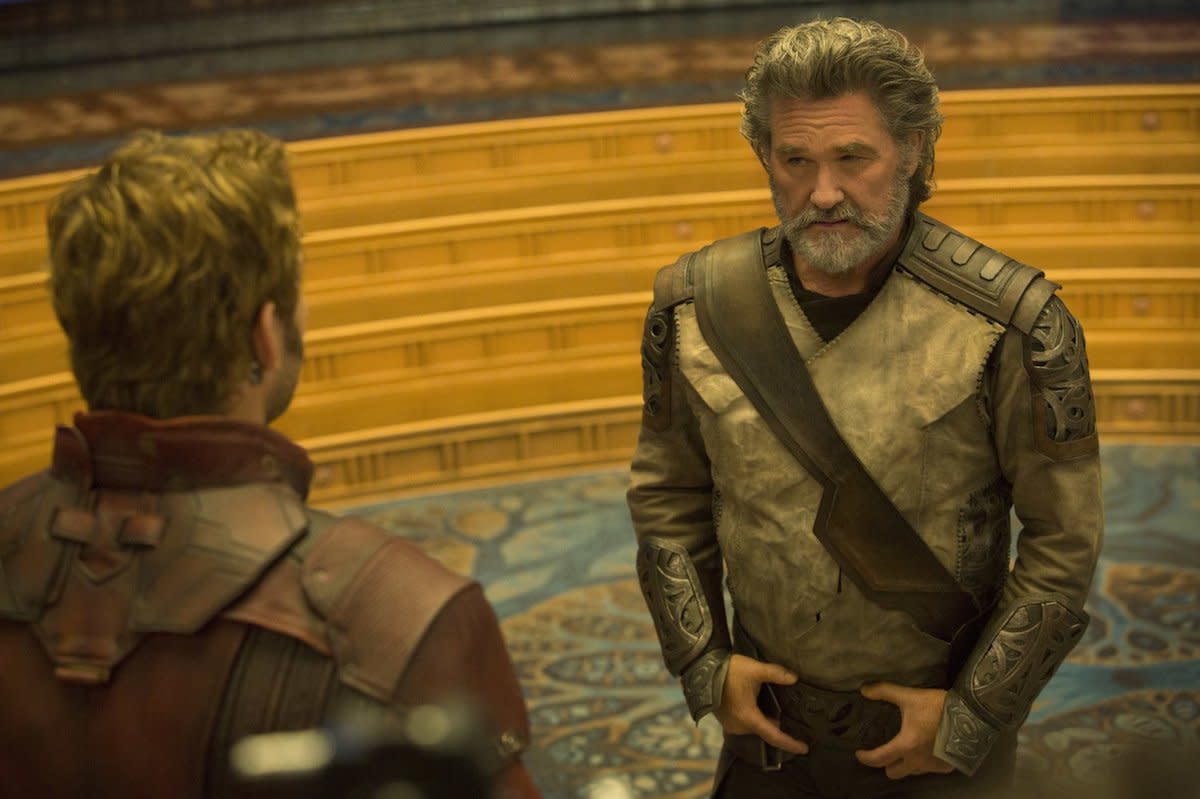 #2.  Guardians of the Galaxy Vol. 2.  Who could you get to play Ego, the Living Planet?  I mean… he’s a planet.  How many actors could conceivably pull that off. As soon as I heard that Kurt Russell had been cast in the Marvel Studios project, i knew the role would be in good hands.  Plus, we got the de-aging technology in flashbacks making Kurt Russell look like he was years younger.  There was a real connection between Ego and Peter Quill and you could almost believe that they were father and son.  One of Marvel’s best one-shot villains.

#1.  The Thing.  Of course.  One of the best horror/sci-fi films of all time, Kurt Russell brought his entire gravitas to that role.  The alien is fantastic, especially since it is practical effects.  Yes, it may look dated by today’s standards, but I wouldn’t have had it any other way.  There is a great cast filled with awesome character actors and is, arguably, the best film from John Carpenter.  There is so much tension and a feeling of claustrophobia as the group is trapped in this blizzard in this station where this alien is taking over their bodies…and you have no idea who is now an alien and who is not.  Tremendous.  Easily the best film Kurt Russell has been in.