[Note- This post will contain SPOILERS for the recently dropped SCHMOEDOWN SPECTACULAR III.  If you have not yet watched that event, please do so before going over this list.]

The Movie Trivia Schmoedown has become one of the best shows on television and they present some astounding competitive matches throughout the year.  The brainchild of

Kristian Harloff and Mark Ellis, the Schmoedown continues to grow to new heights each year.

The matches on this list are the Top 30 matches in the opinion of EYG.  You may have other thoughts and that is perfectly fine.  I will state that I think this list was extremely challenging to compile as there were so many top notch matches presented on the Collider Video YouTube channel that narrowing it down to a Top 30 was not easy.  In fact, there may be matches that I missed that should be included.

My original list was well over 30 so I had to trim the choices down.  How this was determined was by not only how competitive a match was, but by how entertaining.  Some matches dropped down the list because of a TKO result.  Some appeared on the list because of reactions of the players.  Some are here because the match, although not technically sound or even that close, featured entertainment and laughter or amazing moments.

#29.  Drew McWeeney defeated William Bibbiani. Began with the epic “Beast through Mark Reilly’s chest” entrance. This was arguably the low point of the year for “The Beast” before he went on a huge run.

#28.  Lon Harris defeated Josh Macuga.  This was not that close of a match but made the list because of Josh Macuga’s entertaining banter and Lon’s character work.

#27.  Samm Levine defeated Rachel Cushing to retain Schmoedown Championship.  This one would have been higher on the list but the TKO result (which came because of a brilliant speed round from the champ) affected it.  Prior to the speed round, this match was going bonkers.

#26.  Ben Bateman defeated Scott Mantz.  Bateman suckered Mantz into putting the Movie Release Dates slice on the line and wound up winning it for a while and Ben had his face on the slice.

#25.  Who’s the Boss defeated the Cinemaniacs.  In the Anarchy tournament, this was one of the most competitive matches and continued to feature the great humor of Matt Knost.

#24.  Emma Fyffe wins the Commissioner Bowl at the Schmoedown Spectacular III.  Emma surprised the world by defeating Kristian, Finstock and Thadd Williams to claim the commissionership.  Another remarkably entertaining match that may not have been as technically sound.

#23.  Clarke Wolfe defeated Mike Kalinowski in sudden death for #1 Contender.  Both Clarke and Kalinowski had big seasons and this early season showdown was no exception.  Featured one of the more difficult round threes of the show’s history.

#22.  Ethan Erwin defeated Clarke Wolfe in Ultimate Schmoedown finals.  It came down to one word.  Clarke had the match won but she answered her five point question Southside With You, instead of Southside With Me and lost.  One word.

#21.  The Shirewolves defeated Brianne Chandler and Bryan Bishop for team titles.  While not as close of a match, this makes the list for the reaction of Clarke and Rachel after the victory and for the historic nature of their win.

#20.  The Wildberries defeated the Reel Rejects at the first live show.  This match was very competitive and matches are always entertaining with the Wildberries.  This opening match set the tone for the night at the Schmoedown’s first live event.

#18.  2018 Free 4 All.  Brianne Chandler won the Free 4 All with amazing performances from William Bibbiani and Ethan Erwin.  The Free 4 All dropped a bit because the match did not end up as an elimination style.

#17.  Mike Kalinowski defeated Mara Knopic for the Innergeekdom championship at Schmoedown Spectacular III.  Great match that went into sudden death (how many sudden deaths did KO have this year?).  Match was marred by awkward post match interview.

#16.  Marc Andreyko defeated Ethan Erwin.  Andreyko is the only person to have defeated rookie sensation Ethan Erwin this season and the match was very strong.  Andreyko had himself a truly great 2018 in the Schmoedown.

#15. Andrew Ghai defeated Dan Murrell.  In the biggest shock of the year, Andrew Ghai, whose heel work has been off the charts this season, knocked off the returning GOAT, Dan Murrell at the Collider Collision II.  Ghai was absolutely on fire in this match and deserved the upset win.

#14.  Mara Knopic defeated Mike Kalinowski in the Innergeekdom Tournament.  Kalinowski may have gotten the toughest 5 point question in Schmoedown history.

#13.  Team Action defeated DC Movie News.  This competitive match led to the heel turn of Kalinowski and the creation of KOrruption.

#12.  Take the Cannoli defeated the Self-Righteous Brothers.  A match from the Anarchy team tourney, this was competitive and entertaining, featuring the debut of Marc Edward Heuck.

#11.  William Bibbiani defeated Marc Andreyko for the Schmoedown championship.  These two had a tremendous long awaited rematch of their debut match, and now it was for the vacated title.  That this did not make my top 10 speaks to the quality of matches in the Schmoedown in 2018.It also featured one of the best entrances of the season with William Bibbiani enlisting the aid of his Critically Acclaimed teammate Witney Seibold to do an MST3K entrance. 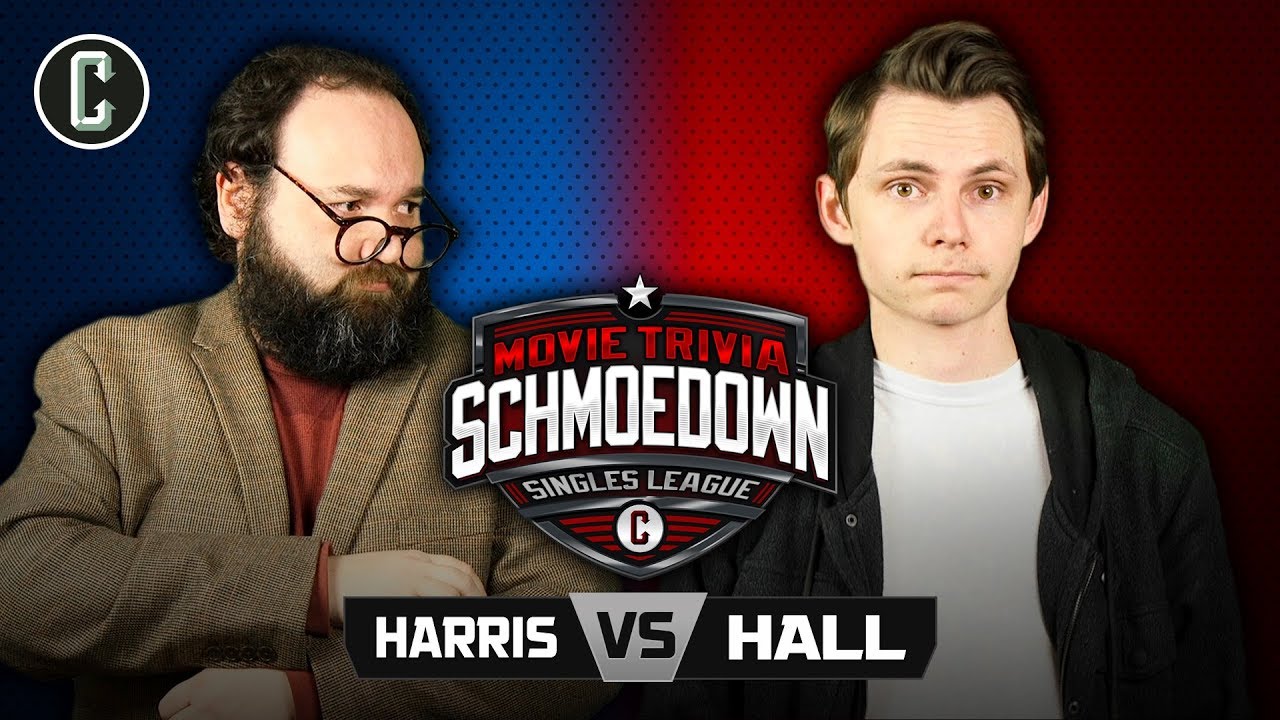 #10.  Lon Harris defeated Cody Hall.  This was supposed to be an early season throwaway match, but Cody Hall did not get that memo.  Cody took the Professor to the limit, going into sudden death before succumbing.  This perfectly encapsulates the Schmoedown’s passion of the competitors in a match that had no real stakes and kicked off season five.

#9.  Shirewolves defeated Team Action at the Live Event.  What a match this was.  Team Action played a great game, but blew a couple of answers and you cannot afford to blow answers against a team as dominant as The Shirewolves.

#8.  John Rocha defeated William Bibbiani for the Schmoedown singles championship.  A match that we wanted to see for years and it did not disappoint.  Rocha decided to stand during the match like Bibbiani has done all year since the Free 4 All.  Rocha completed his huge comeback to the title.

#7.  Top 10 defeated Top That in #1 Contender’s Match.  Maybe the best Top 10 match ever, they were on fire against the trivia might of Top That.  One of the highest scoring team matches of the year.

#6.  The Shirewolves defeated Who’s the Boss at the Schmoedown Spectacular III.  The match of the Spectacular this year saw these two teams put on a classic that came down to the final question.  The respect shown after helped to elevate the match even more.  Back and forth until the very end with maybe the best round two ever.

#4.  Samm Levine defeated Clarke Wolfe to retain the Schmoedown Championship.  Another sudden death classic.  This match was back and forth and could have been anyone’s victory.

#3.  Above the Line defeated the Patriots in an Iron Man Match.  Two of the best teams of all time going at it in a 30-minute Iron Man Match.  What more could you want?  How about the break up of the Lion’s Den in the post match interview?  Movie trivia masters on display in, perhaps, the most challenging format available.

#2.  Above the Line defeated The Patriots for the Team Championship.  Finally, the might have fallen.  The Patriots, who went 9-0 prior to this match and held the team championship for a year and a half, finally met defeat at the hands of Samm Levine and Drew McWeeney in a match that went down to the final question.

#1.  Mara Knopic defeated Rachel Cushing in the Innergeekdom tourney.  I have never seen anything like this.  This was another sudden death match that ran multiple questions, but it was compounded by the fact that Rachel was sick as a dog and that Mara was in pain from an auto accident the day before.  With both women distinctly under the weather, they could have rescheduled the match for a time when they both were feeling better, but they did not and they went on to put together not only the best match of this year, but one of the all-time classics in Schmoedown history.  They showed heart, passion and created the most compelling drama of any match during this season.  Both women showed the amazing competitors that they are and that they were true champions.