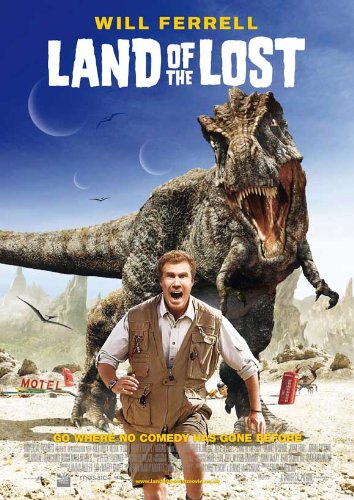 The Second Chance/First Impression Binge continue this morning with an adaptation of a late 1970s, early 1980s kid show from Sid and Marty Krofft called Land of the Lost.  The film starred Will Farrell.

I have seen parts of the film before and did not like it at all, so second chance certainly fits here.  I watched the Land of the Lost TV show as a youth and always enjoyed it.  Then, when it came out on DVD, I purchased the entire series as a lark.  It was nostalgia, but I discovered something surprising.  The TV series was way better than I remembered.  In fact, I would go on and say that Land of the Lost was one of the best science fiction series of all time, certainly ahead of its time.  Of course, the biggest issue it faced was the budget and having dinosaurs and other such looked cheap.  That lack of ability to create the proper look caused Land of the Lost to not be taken as seriously as it could have been.  However, go back and watch the show for the stories, they are outstanding.

Unfortunately, whoever made the movie did not have the same love of the show as I did because they made a travesty, taking some of the best parts of the show and warping it into something unrecognizable and downright insulting.

I am not a Will Farrell fan, but the first five minutes or so of the movie gave me some hope.  I enjoyed the weird interaction with Matt Lauer and saw potential in the way they were setting up the story.  Then, Will Farrell and his idiotic comedy took over and the film took a nose dive into T-Rex poop.

Anna Friel played Holly and Danny McBride played Will, taking both of those characters in a completely different direction than the show.  There was no connection between them and Rick Marshall (Farrell). The way they entered the Land of the Lost was silly and everything afterwards was inconsistent and just a waste of a great concept.

The movie lost the heart that the series had and never found anything even close to it.  It took the characters and settings of the show and warped them into an unrecognizable mess that was simple a name of a character.

This is the third out of four movies during this binge that is terrible and I may be rethinking the theme of Second Chance/First Impression Binge.