It is cold here.

I mean, cold as a dead body.  Heh heh.  No, really, we are in an Arctic blast right now and it is going to be under zero for the next couple of days with a wind chill around -50 tomorrow.  So I am off school and have a great chance to listen to the Top 10 Show unencumbered.

And this week was the Top 10 Movie Death Scene, hence the awful pun from earlier.

This was a tough list to compile because there were so many great choices and from all kinds of different genres.  Not only different genres but different feelings/reasons/emotional responses.  From shock to sadness to joy.

Oh, and of course…I should say that this contains all kinds of SPOILERS if you have not seen these movies.  You have been warned.

#10.  Bing Bong (Inside Out).  I thought of this one but I wasn’t going to include it because Bing Bong was not actually alive and did not actually die (he just faded away-forgot) but then John Rocha included him on his list and that was all I needed, because this was one of the saddest, heart-wrenching scenes I can remember.  Inside Out is one of my favorite Pixar movies and animated movies, and Bing Bong was a huge reason why.  I decided to only place this at ten because of the questionable aspects of the “death” because otherwise, this might be considerably higher up the list.

#9.  Kane (Alien).  I had about five or six deaths fighting for this final spot, but the little details that Matt Knost told today about the other actors not knowing about what was going to happen as to be able to film their actual reactions helped propel this death onto the list.  Imagine the horror of seeing this and not expecting it.  To make sure this is what I wanted, I pulled it up on YouTube and the reactions of everyone around poor John Hurt was astounding.

#8.  Marian Crane (Psycho).  The famous shower scene from Alfred Hitchcock’s Psycho is one of the most iconic death scenes in any movie ever.  The idea that Hitchcock took the character who seemed to be the movie’s main protagonist and biggest star and killed her off in the first half of the movie was unbelievable and groundbreaking.  It is a scene that has been copied and parodied countless times and never fails to provide the necessary horror that Hitchcock was trying to find. #7.  Logan (Logan).  One of the greatest comic book movies of all time ends with the amazingly poignant and saddening death of its main character.  Logan, played for the final time by Hugh Jackman, was a character we had seen for years and many movies, and this swan song was as beautifully done as any film.  It was only made more stunning by the work of young Dafne Keen. The father-daughter aspect of the scene brought even more gravitas to the movie and made sure that I was emotionally spent by the end.

#6.  Satine (Moulin Rouge).  Here was another one that hurt.  The musical was a romantic story of a young writer falling in love with a courtesan at the house of ill-content known as the Moulin Rogue.  It led to a great, sweeping romantic story that was destined to end in tragedy.  In this case, Satine, was felled by tuberculosis and died in her love’s arms.  Played perfectly by the lovely Nicole Kidman, you could feel the anguish displayed by Christian (Ewan McGregor).  In the end, this was a story about love.

#5.  Quint (Jaws).  Oh boy, did this scene scare me as a youngster.  Watching Quint struggle to try and avoid the gigantic shark’s jaws was frightening enough, but you hoped beyond hope that the old sailor would find an escape.  Unfortunately, Quint finally succumb and the imagery of him being eaten by the shark was one that would stick with me forever.   We had connected to Quint in such a personal way with his story of his time on the Indianapolis that this death was even more difficult.  Jaws was one of the best movies ever made and this scene is a huge reason why. 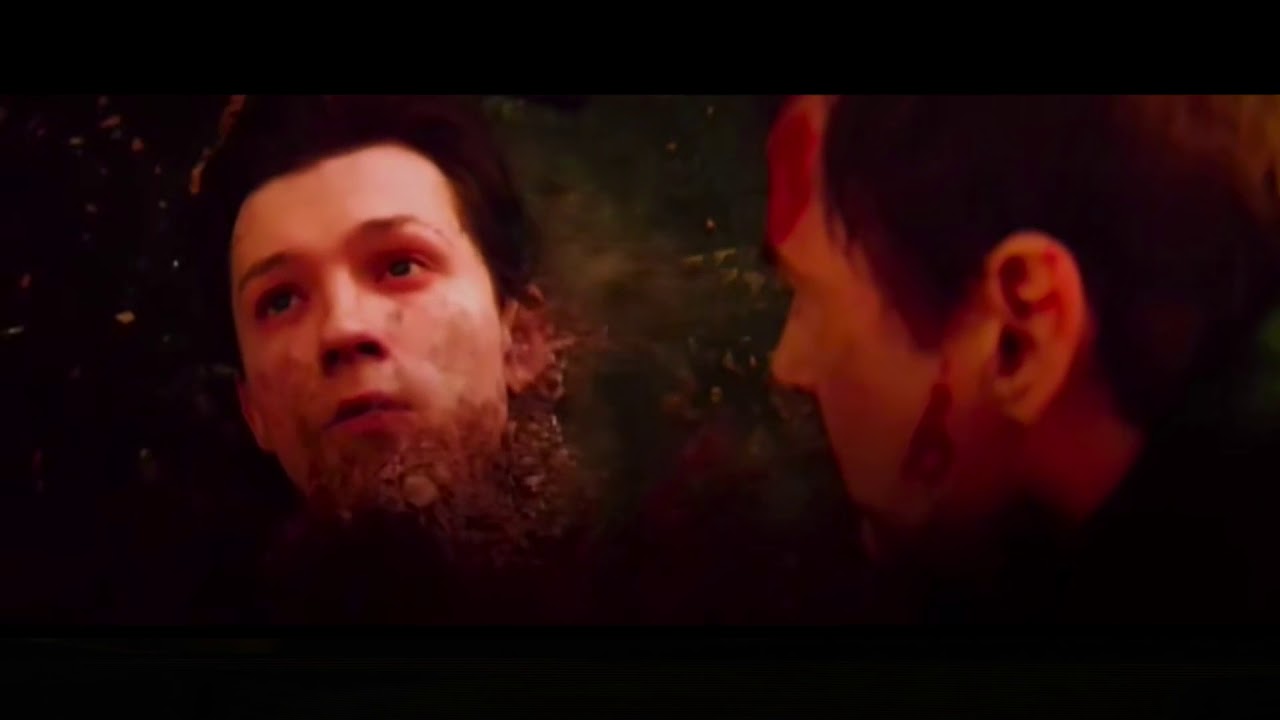 #4.  Peter Parker (Avengers: Infinity Wars).  “Mr. Star, I don’t feel so good.”  And with those words, Peter Parker began to fade away from the snap.  Peter Parker, Spider-man should not have been the one to go, but his death (however temporary) brought such an emotional wallop to the Infinity War that I can’t imagine it without that scene.  Seeing this young kid grasp the fact that he was going to die and not want to go, with those adlibbed words from Tom Holland, never fails to break me up.  I love Peter Parker.  He is my all-time favorite fictional character in any medium and seeing him dusted was wrecking.  This was actually the first name that popped into my head when considering the list.  These top four were all possibly switchable.

#3.  Hans Gruber (Die Hard).  What a great end to one of the greatest villains of movie history.  Dropping from out of the window of the Nakatomi Plaza and falling to his death, the brilliant Alan Rickman did not know he was being dropped.  Apparently, they released him on two instead of three and the reaction of Gruber was the real fear shown by Rickman.  Hans Gruber was the perfect foil for John McClane and their dynamic made Die Hard one of the greatest Christmas movies around.

#2.  Mufasa (The Lion King).  Damn that Disney, making us all grieve the loss of parents.  Not only did poor Simba have to watch his father trampled to death by the wildebeest, but he had to know that he died trying to save him.  The guilt drove Simba away from the kingdom for years, allowing evil Scar to take the throne.  The Shakespearean connection was apparent, but the emotional stakes of the scene were off the charts.  James Earl Jones provided the voice for the heroic king of the jungle and his loss is one of Disney’s finest parental deaths.

#1.  Count Rugen (The Princess Bride).  “I want my father back, you son of a bitch!” Unlike all the other deaths on this list, this one was cheered in the theater.  Count Rugen, the Six-Fingered Man, had killed Inigo Montoya’s father when Inigo was just a young boy of 11.  Inigo dedicated his life to searching for hi revenge.  And when he finally gets it, there is such a joy.  The Princess Bride is my favorite movie of all time and I absolutely love this scene.  It gives me goosebumps every time.  The performance of Christopher Guest as the evil Count and Mandy Patinkin as Inigo Montoya brought such a passion, a realism to a scene that is inside the silliest comedy around.  You could feel the pain of Inigo and, first, the arrogance and then the fear of Rugen and that really packed in the emotion that led to the release of cheers from the crowd.

Honorable mentions:  Man there are a lot.  I mentioned about the ones that I debated about putting at #9. Those included Ellie (Up), Brooks (Shawshank Redemption), Spock (Star Trek II: The Wrath of Khan), Charles Xavier (Logan), William Wallace (Bravehart) and the Wicked Witch of the West (The Wizard of Oz).  Any of those could have made a great #9.  Others I listed included Apollo Creed (Rocky IV).  King Kong who died for the beauty.  James Gunn says that Groot died in the original Guardians of the Galaxy and the Baby Groot is his off-spring and, if that is the case, makes the scene with Groot’s sacrifice all the more tragic.  All the heroes of the SNAP from Avengers: Infinity Wars was considered, but Parker was easily the standout there.  Darth Vader‘s redemption at the end of Return of the Jedi was special.    Bonnie & Clyde and their death in a hail of bullets was a possibility.  Thomas J died off screen in My Girl, but that did not mean that his death was less tragic.  Little kids weren’t supposed to die.  Mickey form Rocky III was tough to handle as well.  Gollum falling into the lava in Return of the King, Cesar and his final death in War of the Planet of the Apes, Toht and his face melting in Raiders of the Lost Ark, Blain who did not have time to bleed in Predator, Vizzini and his laugh in The Princess Bride, Bubba from Forest Gump, Dr. Malcolm Crowe in The Sixth Sense were all great death scenes too.  Oh, and Bambi’s mom… damn you Disney!