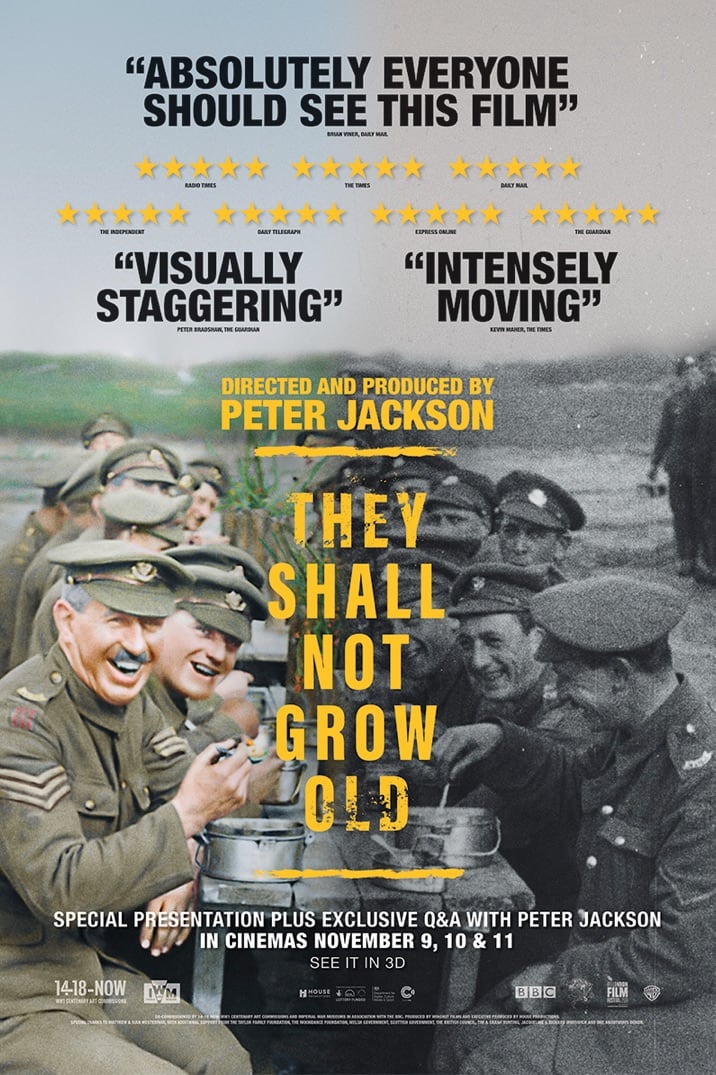 Peter Jackson’s documentary They Shall Not Grow Old has been released in the theaters after a few special showing through Fathom Events.  I got a chance to see it today and the film is a technical marvel and very difficult, at times, to watch.

Jackson took footage from World War I and updated it, colorized it and revitalized it.  It is amazing what he was able to accomplish with the technology of this age.  We saw example of the film that he started with in Jackson’s own introduction to the movie and then we saw how it was transformed into more than that during the film.  No matter what you may have thought about the film, being able to restore this film and keep it available for history is a tremendous accomplishment.

The film has amazing and powerful moments to it as well as we hear from voices of people who had been there narrating the story as we discover the truth of how this time affected these soldiers.

I will say that it started a bit slow but the story really took off as the midway part of the film began.  There are facts that I never would have thought about mentioned in the movie that really highlight the unsanitary, unfavorable situation these soldiers found themselves thrust into.

My favorite part of the film was the section where it talked about the German soldiers that had surrendered.  They were treated more humanely than I would have believed and even acted as men carrying stretchers for wounded.  This section truly accentuated the lack of difference between the British and the Germans, going as far as to implicate that the soldiers did not really want to be fighting, despite the constant barrage of weaponry going on around them.

There were brutal scenes as well, spotlighting the horrors of war and the results of such a battle.  Both sides were shown in their suffering and there were moments that were unbelievably challenging to watch.

Compelling and challenging, They Shall Not Grow Old is an accomplishment on a grand scale for Peter Jackson, who dedicated this film to his grandfather who fought in World War I in the British army.  It not only is a historical document, but also a commentary on the superfluous war.