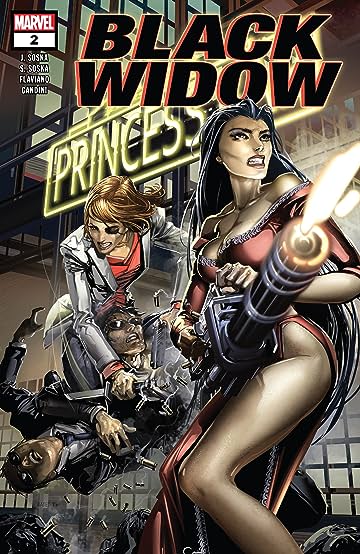 The new Black Widow limited series is at issue number two and it continues the top notch work from issue number one.  I must say though, since Natasha has returned from the dead, she has really stepped up her brutality.  There is some really hardcore violence here as Natasha is searching in Madripoor for an organization called No Restraints Play, a site where players can bid/watch/partake in live torture.  Natasha has dedicated herself to the complete decimation of this organization.

And she does not care what she does to accomplish that goal.

I will say that a couple of the scenes made me a bit uncomfortable.  I know Natasha was a spy and, because of her background in Russia, has done such things before, but I have always been one of the “my heroes don’t kill” type of fan.  Still, I am interested in the story as a character study on Natasha and what she is willing to do to bring down this horrible group.

Natasha has also assumed an identity of Lady Patch, much like Logan did in his old days in Madripoor.  There were a group of villains who made cameos in this issue that might just raise the stakes.

I enjoyed the issue even though I am unsure about the way they have taken Black Widow.  I am definitely in for the rest of the series.