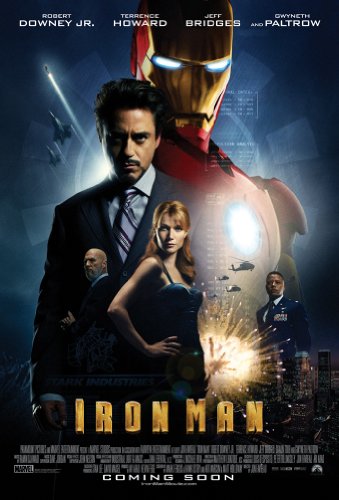 In honor of the upcoming Avengers: Endgame, the conclusion of a 22-movie arc that is unprecedented in the world of movies, I am beginning the great Marvel Cinematic Universe Movie Re-Watch leading up to Endgame’s release on April 25th. The MCU is unlike anything that has happened before and the re-watch for the Doc’s Classic Movies Reviewed section at EYG is going to be a chore.  But I am looking forward to the challenge.

We start, by following order of release, with 2008’s Iron Man.  The film that kicked the whole thing off.  Directed by Jon Favreau, and with the MCU just a pipe dream yet, Iron Man took talented and troubled Robert Downey Jr. and cast him in the role he was born to play.  You did not know before we saw the film that RDJ was perfect as the billionaire playboy.  In fact, one could argue that this film would not have worked nearly as well as it did without the quipping, funny, fully-human Robert Downey Jr. as Tony Stark.  With Downey Jr.’s spotted past, the casting was a risk, but it was a risk that paid off royally for everyone involved.

Watching Iron Man, the film is different than the current MCU formula, much darker than I remembered it.  Though you could see the Marvel formula developing as the film progressed.  Iron Man was pre-Marvel Studios (officially) and there is a look to the film that feels more like a smaller independent film than a big budget blockbuster.

One of the best parts of the film was the beginning of the on-screen relationship between Tony Stark and Pepper Potts (Gwyneth Paltrow).  The first couple in the MCU, Tony and Pepper have chemistry unlike few couples in the franchise.  Watching this pairing develop over the movies has been joyous, and seeing the origin of the match is great.  Of course, we did not see when they meet for the first time, but the film introduces the relationship in such a wonderful manner that you knew they were soulmates even when they did not.

Obadiah Stane was an underrated villain in the MCU hierarchy of villains.  As the opposite of the hero, Stane was the first of that archetype that filled MCU movies.  However, this villain is played by the always epic Jeff Bridges.  He does transition into Iron Monger a bit too quickly in the third act, but other than that, Iron Monger is way better of a villain than he gets credit for.

Terrence Howard appeared as James “Rhodey” Rhodes in this film before being replaced by Don Cheadle in Iron Man 2.  Howard was fine as Rhodey in the minimal screen time that he received, but apparently there was some behind the scenes issues that led to the change.

Iron Man was not just about a super hero in a metal suit.  It is about character, which is why these Marvel movies have been so successful.  It introduces us to characters who we fall in love with and then give us reasons to root for them.  Tony Stark could easily be a one-note character but he is deep and driven and amazingly human.  The character drama is at the heart of all of these movies, and clearly on display in Iron Man.

Iron Man also features some tense situation.  I was so worried when Pepper and Obadiah are in Tony’s office, I was so scared that something would happen to Pepper and that made me anxious.  Seeing how she is saved by Phil Coulson is cool too, with as much history as we have with that character.

It is mind boggling to think how important this film was, because, if Iron Man did not work, if it were a flop or critically panned, we would not have gotten the franchise that has entertained us for the last 10 years.  Everything that happened in Iron Man gave us the road map to what we have now and have seeds that will be paid off inside Avengers; Endgame.