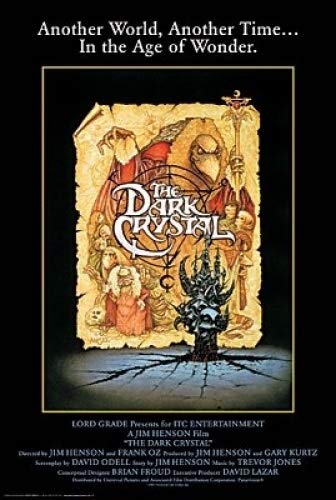 I loved the Muppets and Jim Henson growing up, but I must say, that my memory of The Dark Crystal was that I was not a huge fan.  So I wanted to take another look at it, as it is a classic film from Henson and because of the announcement that there would be a Netflix series called The Dark Crystal: Age of Resistance debuting this year.

After watching The Dark Crystal again, I feel much the same way.  I was not a fan of the movie.

Wow.  Is this thing dark.  I did not remember it being as dark and scary as it is.  I cannot imagine showing this movie to a little kid.  It is nothing like the Muppets.

That is not a big deal, but there is such a huge exposition dump right off the bat and then the characters take too long to connect to the audience.  There are too many characters that are more annoying than anything else (Fizzgig for example).

The visuals are stunning and make the film special.  The creatures are interesting and always have that flair from the Henson workshop.

I did like the villainous Chamberlain, exiled from the Skeksis after his attempt to grab the power of the throne after the last leader died.  Chamberlain was manipulative and a giant backstabber.  He had desire for power himself.  He reminds me a bit of the Transformers and Starscream.

The Dark Crystal was a mixed bag for me, because there were some lovely visuals and parts that were fine, but I had some major issues with characterization and narrative format.