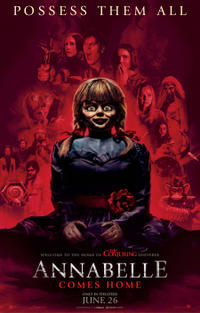 As for Annabelle, the first film was just terrible and the second one was really good.  With Annabelle Comes Home, the film is way better than the first one, but not quite up to the quality of the second one.

Ed (Patrick Wilson) and Lorraine Warren (Vera Farmiga) bring the doll Annabelle back to their house and place her into their room of evil things to protect the world from the demon within it.

Time passes and the Warrens are on a case, so they need their daughter Judy (McKenna Grace) to have a babysitter.  They use a babysitter named Mary Ellen (Madison Iseman).  Mary Ellen’s friend Daniela (Katie Sarife) invites herself over to the Warren house for her own reasons.  Daniela finds her way into the room of evil things and, without understanding what she was doing, accidentally frees Annabelle.  Chaos ensues.

Ed and Lorraine are not in the film much.  It really is about the three girls, Judy, Mary Ellen and Daniela, and their own problems.  These three girls do a solid job in the film.  I enjoyed their performances.  They felt like good pieces of a horror movie.

There were a bunch of jump scares here, maybe too many.  They certainly use the horror tropes fully.  It is basically a haunted house movie turning on the people inside the house.  There are some pretty decent ghosts/creatures here besides Annabelle and I wonder if the Ferryman or the Hellhound or the Bride are going to be  future installments in the Conjuring Universe.  That thought is going through my mind as I am watching this movie.

The other thought that is going through my head is how much this movie was like Ghostbusters, in particular, the scene in Ghostbusters where Walter Peck has the containment unit shut down and all kinds of ghosts explode from it.  I had that in my head the whole time I watched Daniela going through the evil room of things.

I did like the message that the film was going for with Daniela and her arc in the movie.  She was dealing with the loss of her father and her own feeling of the situation and there were some emotional moments dealing with the story.  I think I liked this more than I liked the sub plots of the other girls in the house, which is important because Daniela also does most of the stupid things while there.  I understand the pain behind it though and that helps me from just believing that she is the stereotypical dumb horror movie character.

There was some odd comedic beats in the film as well, especially with the boy Bob (Michael Cimino), whose got balls.  Bob lived across the street from the Warrens and had a crush on Mary Ellen and wound up in the strangest situations as the movie went along.  He did not necessarily feel as if he were in the same movie as the girls were in.  The tones seemed to be different depending on which characters were being featured.

I liked this for the most part.  It is not the greatest film ever, but it was an entertaining time.  I liked the characters and I liked the creatures.  There could have been more of Annabelle, to be honest.