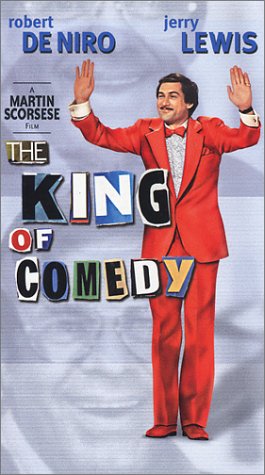 I noticed that the Doc’s Classic Movies Reviewed section here at EYG is reaching a milestone.  This is film number 196 reviewed in the section so we are on a path to 200.  Number 196 will be Martin Scorsese’s early 80s film, The King of Comedy.

While the movie itself flopped at the box office, The King of Comedy received positive critical reviews.  The King of Comedy is a dark comedy featuring Robert DeNiro as downtrodden sad sack, Rupert Pupkin, a wannabe comedian whose start as an autograph hound put him in the orbit of famous late night talk show host Jerry Langford (Jerry Lewis).

In order to get rid of Rupert, Jerry tells him to contact his assistant and he would have him on his show.  Jerry had no intention of following through on that promise, but Rupert was fairly delusional.  Living in his mother’s basement, Rupert would fantasize about meetings with Jerry and a deep, close friendship between the two men.

After being turned away from the offices of the show, Rupert decided to abduct Jerry and use him as a bargaining chip to get everything he wanted.

DeNiro is solid here, but I really did not like Rupert.  He was a sociopath and delusional.  In the third act, you are given a window into the background of the character and you understand him more, but for most of the movie, he is an annoying man who simply would not listen to what people were telling him.

Sandra Bernhard was a co-star of the film as Rupert’s friend Masha who was an obsessed fan of Jerry.  She was downright crazy and she helped Rupert accomplish the kidnapping of Jerry.  Some of the scenes between Bernhard and Lewis are hilariously awkward.

The ending of the movie leaves the audience wondering exactly what happened as the last few scenes could either be reality or more of the delusions from Rupert.

The character of Jerry Langford feels as if he were a Johnny Carson-type, and it is known that Scorsese offered the part to Carson at first, but Johnny turned it down.  Jerry Lewis was very stoic throughout the film and I could have used a little more fire from him during parts of the movie.

But DeNiro is wonderful in a very off-putting performance.  The King of Comedy shows how the life of a celebrity is difficult and how they sometimes have to deal with the crazy fan/stalker and how they could turn to a danger in a heartbeat.

The movie holds up today and actually would work extremely well in the toxic environment of social media and the dangers of fandom.  Though it is one of Scorsese’s least successful films, The King of Comedy is a strong work that is deeper than first glance.