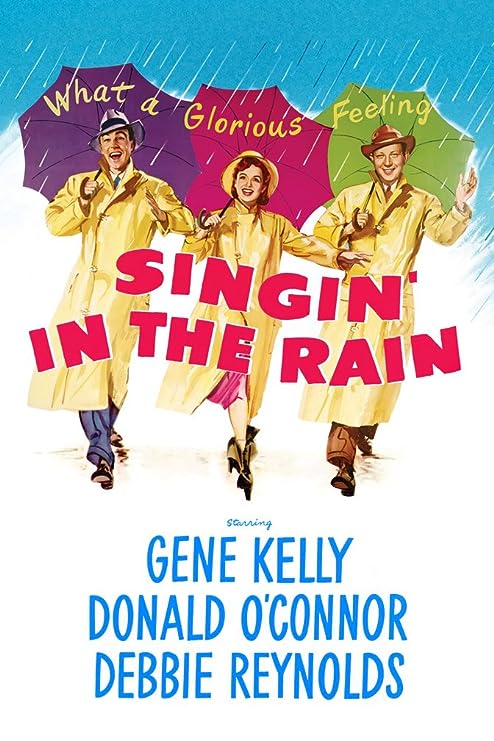 I found a Top 10 Show Re-list this morning and it was Top 10 musicals.  I like musicals so I was excited about doing the list.  I was also looking for a film to make #197 in the push toward 200 in the Doc’s Classic Movies Reviewed section here at EYG so I decided that Singin’ in the Rain, which I thought I had seen as a youngster, would work well.

I was completely engulfed in this movie.  I loved it from the opening until it was finished.  I do not remember anything from the film, except of course for the iconic song and dance of Gene Kelly with his umbrella, singing and dancing in the rain, spinning around on a lamppost.  That I recognized and remembered but everything else was new.

I had no idea the number of songs that I recognized that were actually in this movie.  My toe was a-tappin’ as each new song came up.

The film started with a huge surprise as well.  A voice … the first voice I heard int he movie.  It was Aunt Harriet!  Aunt Harriet, played by Madge Blake, from the 1966 Batman TV series, was there playing a reporter on the red carpet.  She was uncredited, but she was unmistakable.

Singin’ in the Rain tells the story of two movie stars of the silent film era, Don Lockwood (Gene Kelly) and Lina Lamont (Jean Hagen), and their shaky transition from stars in silent pictures to the world of talkies.  The film also focuses on the relationship between Lockwood and a fledgling stage actress Kathy Selden (Debbie Reynolds).

My personal favorite character was Cosmo Brown, played brilliantly by Donald O’ Connor.  He was the supporting and comedic break the film needed and every time he was on screen, I was laughing out loud.  His sensational routine during the song “Make ’em Laugh” was astounding.  He had great chemistry with Gene Kelly as well as the pair’s performance of “Moses” was another highlight of the movie.

Gene Kelly practically glowed throughout much of the movie.  His face was as bright as a sun and he was clearly having a great time.

Every dance routine was breathtaking and as good as anything you could see today.  The finale production of Broadway Ballet is as extensive as ever and the fact that this was 1952 only make the accomplishment all the more amazing.

I will admit that the character of the studio head R.F. Simpson (Millard Mitchell) was not very realistic.  I expect the head of a studio to be more dispassionate of the art and more about the money.  R.F. was very supportive of his stars and of his actors and would have been a great boss to work for, if such a Hollywood exec actually existed.

But that is a minor gripe as the film was just tremendous from start to finish.  I loved this movie and I can see why it is mentioned among the greatest films, not just musicals, made in history.