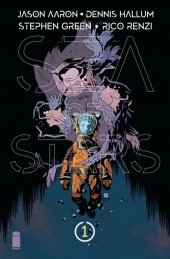 “Lost in the Heavens”

Yes, this is an Image Comic book, the first non-Marvel or DC book that I have reviewed in the Comics This Week section.  Yes, this is uncommon for me, as I am mostly a Marvel guy, but I was at Comic World and Games, my comic shop, today talking with the owner Ben about some writers and I mentioned that I liked Jason Aaron’s work.  Ben suggested that I check out this book, Sea of Stars #1, because he had read it and he connected with it.  It was his last copy on the shelf so I said I would take it and look at it.

I have to say, it was a very solid story and I enjoyed it enough to add it to my pull list, once again, which is very uncommon for a non-Marvel title.

Sea of Stars#1 is the story of a father and a son traveling in space.  They implied that the mother was gone and the father had to bring his son Kadyn along with him on his job transporting goods for the Krogarrian Museum of Space History.  As things do in these sort of stories, the ship they were on was attacked and the father/son were separated.  Kadyn winds up on an alien planet with some weird creatures who are considering eating him and the father is ready to come find him.

The sci-fi story works very well because at the heart of the story is the relationship between the father and son.  They have a problem between them, in this case it looks like the loss of the mother/wife, and the pair is not sure what to do with one another.  The tragic circumstances lead to the understanding of how much they mean to each other.

The book is a lot of set up for what is going to happen, but, as I have said before, I like stuff like that.  Set up indicates that you deal with characterization and I like a slow burn if it deals with characters.  We spend the first half of this book learning about our two protagonists here setting up the moment when they are ripped apart.

There are some wonderful pieces of art within this story, especially at the moment when the two of them are being torn away from each other.

I do like the start of this series and I will be picking it up as we continue.  I hope this is a book that I can continue to look forward to and not a book that winds up getting lost in the pile of books to be read.