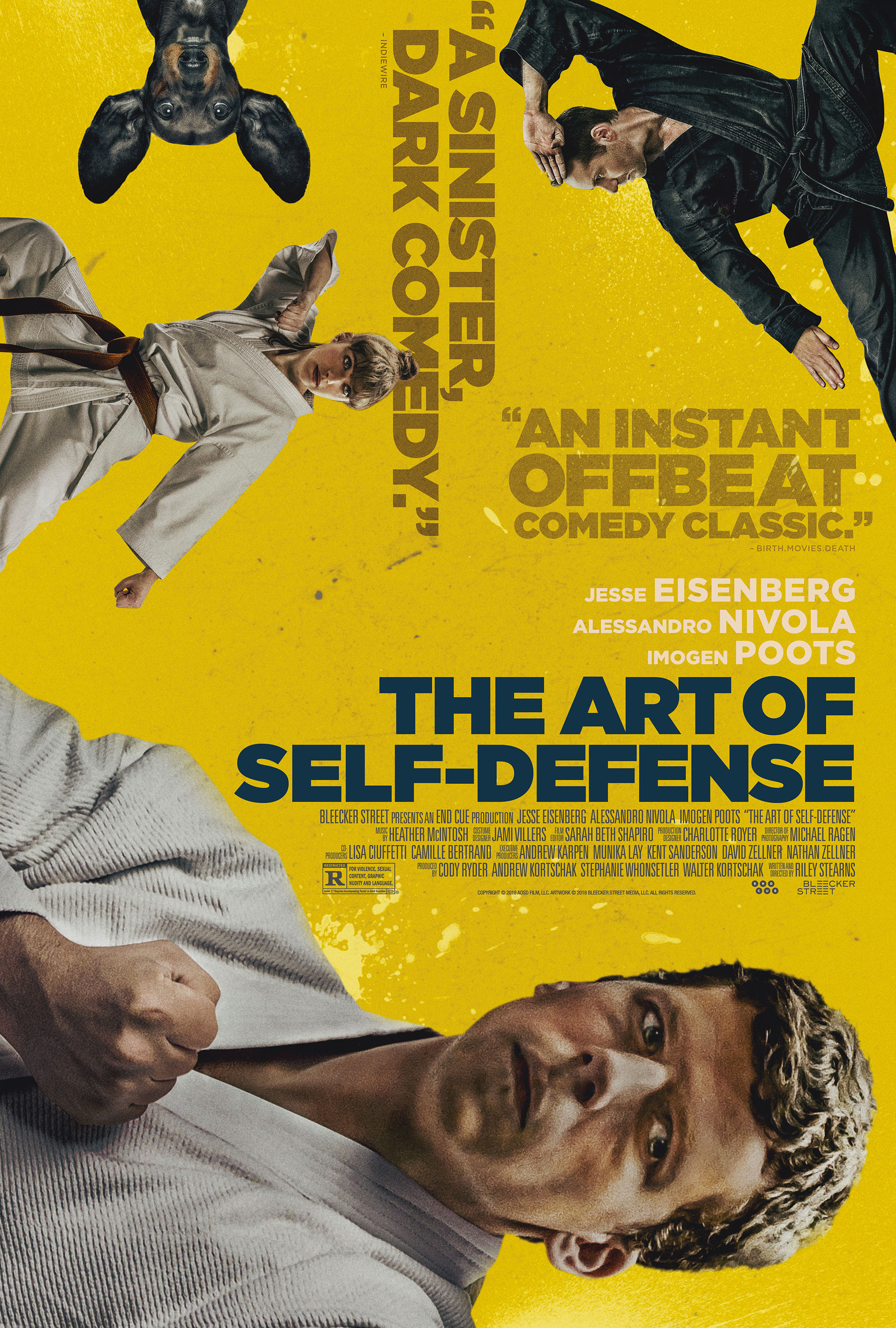 I had never heard thing one about this movie when I saw it in the list of films at the Cinemark.  Or at least, I did not remember anything about it.  After seeing the film I realized that I had seen at least one trailer from it, but it was certainly not a film that ran that trailer a bunch of times (or was very effective of a trailer since I did not remember it).

Jesse Eisenberg plays Casey, a down-on-his-luck schmuck who is just going through life down the rungs of the ladder.  He’s learning French with the hope that some day he would have the chance to go to France.

One night, after coming back from his brain dead job, he discovered that he was out of dog food and he had to head out to pick some up.  On the way to the store, a motorcycle gang stopped him and asked if he had a gun.  Leaving him, Casey was spooked.  After getting the dog food, as Casey was on his way back, he was stopped by the motorcycle gang and beaten into  critical condition for no reason.

As he recovered, Casey, who was already timid and withdrawn, became even more so.

Casey stumbled across a karate dojo and went inside to see the class.  The Sensei (Alessandro Nivola) was leading the class and approached Casey after wards.  Casey is very taken with the idea of karate and with Sensei himself and agrees to come for his first, free class.

After the first class, Casey is excited about signing up, but he soon realizes that the class is leading him on a path that was unexpected.

The Art of Self-Defense is dark and violent, but has many funny moments as well.  Jesse Eisenberg is great in this role, one of his best since The Social Network.  You feel so bad for Casey as bad things continue to happen to him and you can see that many of these bad things are because of Sensei and this karate dojo.  Still, he is so desperate for a relief of the anguish and fear that has so gripped him that he does not know what he can do.

Alessandro Nivola is tremendous as Sensei. He is so cold and calculating and yet so warm and inviting that you are never quite sure what is happening, even when you are seeing clear evidence that Sensei may not be all there.  Nivola plays this contradiction beautifully.

The ending is great, even though, technically, I saw it coming.  That typically irritates me, but the third act is so very satisfying, I can forgive the fact that I had figured out what was going to happen (at least part of the way) prior.

The film dives into the theme of toxic masculinity as we see this echoing throughout the movie.  Yes, there are a few coincidences that have to be accepted, but that does not totally derail the picture.

There were some shocking moments that worked well, keeping the viewer off guard.

The film is a strong character piece focusing on poor Casey and his lack of power, lack of male masculinity in a world where that is required.  It’s like they took The Karate Kid and Cobra Kai, mushed them together with Seven Psychopaths and Fight Club.  It was dark fun.