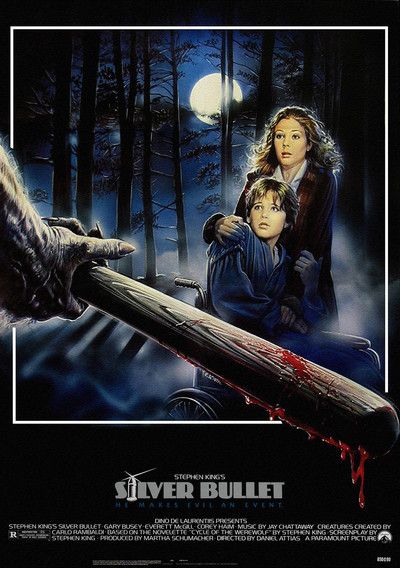 In search of the next film for the End of July Binge-Watch, I came across this film on Amazon Prime.  I had never heard of the film before, but the name Stephen King drew me in.

A little town goes crazy when several murders start to occur, but they did not know the truth. The murders were being committed by a werewolf.  When the young paralyzed boy named Marty (Corey Haim) figures out about the creature, he finds in difficult for anyone to believe him.  Even his sister Jane (Megan Follows) and his off-kilter uncle Red (Gary Busey) found the story far fetched.  However, Marty finds himself targeted by the monster and ends up in several dangerous situations.

This film is about as 80s as you can get.  The hairstyles, dialogue and outfits screamed the 80s which tends to date the film a bit.  Like many films of the decade, the special effects were less than special.  The werewolf was clearly a man in a rubber suit with fur on it, but I can accept that since it was the time.  It is not as if there were intricate CGI available.  And truly, practical effects are a good way to go many times.  Problem is that this was still pretty cheap as effects go.

And the cast was quite recognizable and did cause me to be distracted.  Corey Haim was pretty good as our lead protagonist, the boy in the wheelchair.  It was nice that they had a handicapped child as the lead character and they showed him as anything but a victim.  Haim is charming and has a presence about him.  Sure, the dialogue and many of the things they had him do were not the best, but he did what they asked of him.  It is sad that Corey Haim had such a dysfunctional life and had so many troubles outside the movies.  He was a talented young kid who could have been a huge success.

Other people I recognized… John Locke from LOST (that is Terry O’Quinn) was the Sheriff of the town.  Twin Peaks’ Big Ed Hurley (that is Everett McGill) was the preacher, Reverend Lowe.   Bill Smitrovich, who is a character actor we have seen many places was Andy.  The very first werewolf victim was Manager Lou Brown (aka James Gammon) from Major League.  He looked different but I recognized his voice immediately.

Gary Busey was in his full Gary Busey mode and would steal most every scene he was in.  He had a nice, easy connection with Corey Haim and I believed them as crazy uncle and nephew.

There seemed to be plenty missing from the film, including reasons for the werewolf.  The story was fairly simple, but it did have its moments.  It was not the worst horror movie I have ever seen, but it is far from the best either.