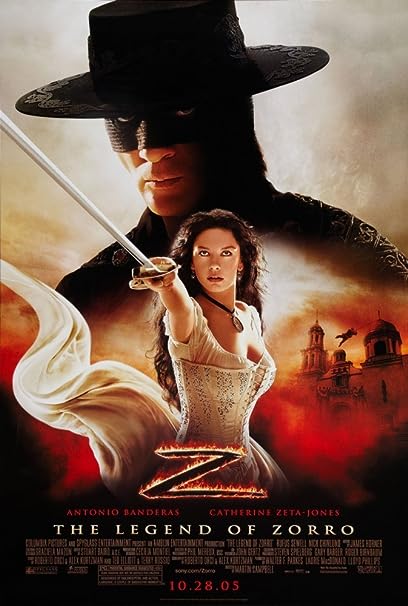 I thought I had seen this movie.  I really enjoyed The Mask of Zorro and I saw that one in the theater, so, in my head, I always believed that I had seen The Legend of Zorro.

Looking at the write up on Vudu, it did not sound familiar, but I just assumed that I had not remembered much about it.

As I started it, I realized… I have never seen this movie before.

It was odd since I liked the first one so much.  I have no idea why I did not see the sequel.  If not in the theater, then on video or cable.

But I had never seen this.

And it was just terrible.

What a flaming mess this thing was.

Zorro (Antonio Banderas) returned to try and help out against a plot to cause trouble when California was joining the Union.  Zorro’s wife, Elena (Catherine Zeta-Jones) wants her husband to give up the life as Zorro and just be Don Alejandro de la Vega (by the way… that was not his name.  That was the name of Elena’s father. Maybe I missed that, but I was confused about the use of the de la Vega name).  She claimed that Alejandro did not know anything about their son, the now ten-year old Joaquin (Adrian Alonso).

When two government agents (one of whom was LOST’s Ben, Michael Emerson) stumbled upon Zorro’s true identity, they used it to blackmail Elena into divorcing him and taking up with Armand (Rufus Sewell), someone involved in the plot against the U.S. government and who happened to be one of her old flames.

Honestly, the first two acts were just brutal.  Characters doing stupid things, acting out of character, comedy that was meant to be funny, but failing miserably, and action nowhere near equal to the previous film.  This was a film I considered several times shutting off.

I did like the story with Joaquin.  He happened to have a trouble streak, much like his daddy, and he was acting out quit a bit.  He also had some athletic ability and agility like the old man.  He did not know that his father was Zorro, so he was dealing with several issues of desertion.  Adrian Alonso was a likable kid, but I never understood how he could be as good as he was at so many things.  The best scenes of this wreck were most definitely with the kid.

The finale with a train was decent, but nothing here that we hadn’t seen before.  The third act definitely had the best action of the film.  The rest of it was totally a waste.

Perhaps I did not see this when it came out because I heard how bad it was and I chose to skip it.  I kind of wish I had done that here too.