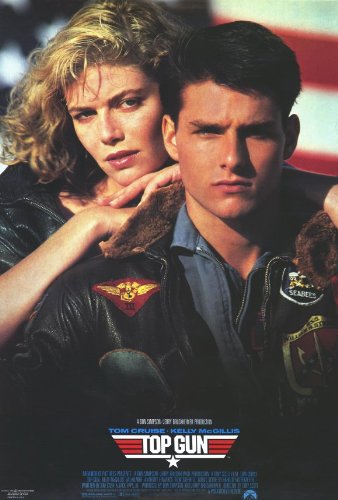 A couple of weeks ago, I created a bit of a stir among people who know me when I admitted that I had not ever seen Top Gun.  So I put it on my list to watch.

I am about to create more of a stir.

I thought this movie was just terrible.  I found it dull.  The characters were all just cutouts.  Tom Cruise’s Maverick had almost zero substance to him.  There was some indication of some daddy issues with him.  Heck, he seemed like a less developed version of Daniel Kaffee from A Few Good Men.  Only difference is Maverick plays beach volleyball and Kaffee plays softball. I guess A Few Good Men came out in 1992 so Cruise had the chance to perfect the archetype because that character and movie are 100 times better than this mess.

The relationship with Maverick and Kelly McGillis was lackluster and unbelievable.  They had zero chemistry.  I felt more chemistry between Maverick and Goose (Anthony Edwards).

They started the film off with a flight mission involving a character named Cougar (John Stockwell) and I thought he would be an important piece moving forward.  Nope.  Never mentioned again.

All of the jet flights were the same.  Nothing appeared different about any of them.  Each shot from the outside of the jets looked identical and had no distinguishing characteristics.  We depended on commentary from the pilots to let us know if something bad was happening.

The other pilots such as Ice (Val Kilmer) were nothings.  No character traits, no personality.  No reason to be in the movie.

Tom Skerret was good.  I have liked him since Picket Fences, but his character was nothing new either.

I have not missed anything by skipping over Top Gun.  I can check that box off my watch list now and that is the only benefit I can see.